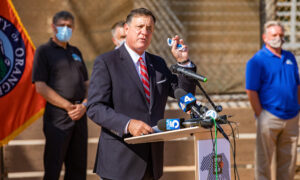 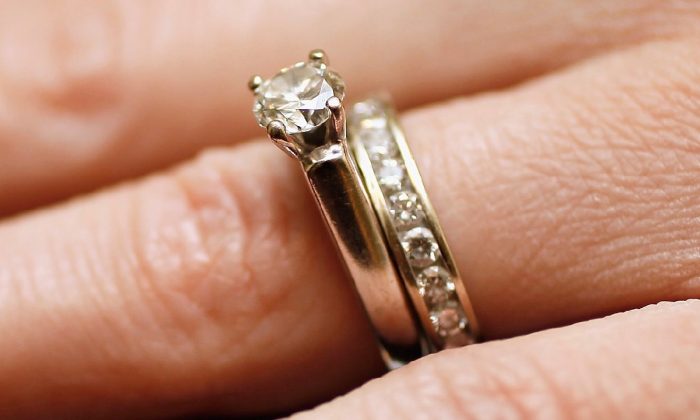 Man Drops Engagement Ring Off Bridge While Proposing to Girlfriend

A man in Missouri was about to make a romantic proposal when he dropped the ring he was carrying into a lake.

The incident was caught on video. The couple later sent out a rescue party of friends to try and find the valuable investment. They did not have any luck. The ring has yet to be recovered.

Seth Dixon and Ruth Marie Salas headed to Loose Park in Kansas City, Missouri on the day of the proposal. They stopped on a bridge, perhaps the wrong location if your palms are sweaty and you’re handling a $3,000 investment. Dixon got about halfway through the proposal before the blunder happened.

“It ping-ponged from one plank to another. You could hear a little plop,” said Salas, describing the heart-wrenching moment via The Kansas City Star.

“With sweaty palms and a pounding heart he knelt down on one knee to say four of the most important words of his life. He cracked open the box to his soon to be bride to give her a symbol of his love. When he opened the box shear [sic] terror struck them both. The ring had slipped out of the box onto the bridge and through the ever so tiny cracks of the bridge. All of a sudden this joyful moment took a rapid turn for disappointment,” wrote local photographer Staci Dabney, who also provided photos and video of the incident and its aftermath.

Close friend Maddie Villareal took the video of the proposal and assures it is genuine. Villareal has known Dixon for 17 years, and Salas for 5 years. They all go to the same church. Villareal was also part of the group that went diving for the ring afterward.

“There was so much mud and nasty algae,” Villareal said. “There were sticks going between my toes. Not my cup of tea, but I didn’t want to leave without the ring. Then it was just getting too dark. And the flashlight was dying.”

Since the video was released, the couple has been overwhelmed by the attention, according to a post on the page of Seth Dixon, the ring fumbler.

Dixon is an Uber driver, and is still making payments on the ring. The couple is set to get married on Oct. 21, and there is no word on what they will do without the ring.

Some people who viewed the video on Facebook suggested the couple hire a professional treasure hunter. Others suggest it won’t be a problem because the newfound fame will serve as encouragement for the store to provide a replacement ring for free.

Salas, a substitute teacher, is hoping Dixon can eventually finish what he started. “I mean we really didn’t finish the proposal so I mean I hope he would propose again,” she said.

Dabney started a gofundme page to help the couple get a new ring, but then shut it down after only $261 was raised, for as yet unexplained reasons.

Fortunately, the diamond on the ring is insured, but the other parts of it are not, according to The Kansas City Star.

Salas is keeping positive. “I know God will work everything out,” Salas said. “We’ve kind of laughed at it, too. Gotta make fun of it, somehow.”