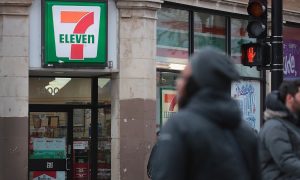 An unidentified man dressed up as a FedEx worker robbed a family of cash and jewelry worth $130,000 in a Brooklyn neighborhood on Sept. 23.

The NYPD said the fake FedEx delivery man knocked at the family’s door at Sixth Avenue and Bay Ridge Avenue at about 3 p.m. on Sept. 24, reported the Fox2Now.

The security footage uploaded on Reddit shows the fake delivery man walking up the stairs to the home’s entrance and knocking at the door.

After he walked inside, another man in a blue t-shirt and a blue backpack followed him inside the home.

The man dressed up as the FedEx employee showed the family a badge telling them that he is with the police, reports Fox2Now.

Meanwhile, the second man who followed him walked upstairs to the second floor of the home. He ransacked the family’s bedroom and extracted a safe from their closet.

The second scene in the Reddit video shows the FedEx impersonator and his accomplice tying the victims’ mouths aggressively with duct tape. The two victims sat on a sofa, their wrists also tied with the duct tape while the TV played.

While the impersonator tied the third victim’s mouth and wrists with the duct tape, his accomplice dragged a bag with the loot out of the back door.

The robber then talked with someone over the phone and then tied the ankles of the third victim with tape, pushed her on the sofa, and walked out of the home.

The police said they drove off in a 2008 Jeep Grand Cherokee with a New York license plate reading “HTP 3906.”

After both the robbers left the home, the security video shows the third victim getting up and hopping around the home before going towards the back door where the robber left the home.

On social media, people speculated about how the robbers knew that there were cash and jewelry inside the home.

“I wonder how they knew this family had that safe and that kind of money and jewelry,” said a user in response to the Q13Fox story on Facebook.

“Good reason to always be prepared to defend yourself, your loved ones and your home,” said another.

People said it was an “inside” job and the robbers had planned their act well.

“Definitely planned. They have a security system but no other means of protection? They just so happened to have 125k in cash on hand just laying around? This screams inside job,” said another user on Facebook.