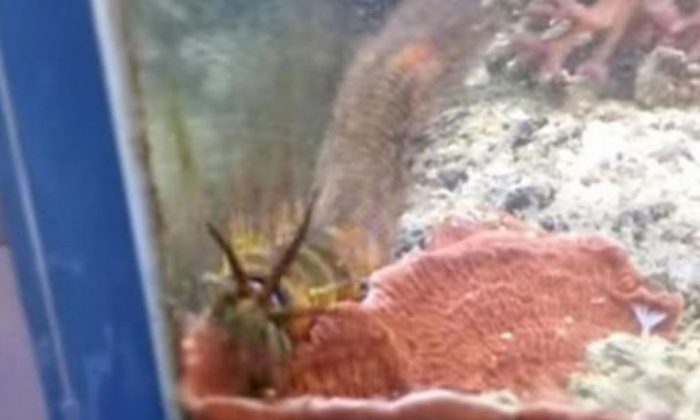 This thing is a bristle worm—or possibly a eunice worm

A man got a shock when he discovered a 3-foot-long bristle worm that went hiding in his fish tank for two years.

He said it was possibly a eunice worm (Eunice aphroditois), known as the Bobbit worm. It was uncovered when the man cleaned his tank.

The uploader later wrote: “I was breaking down the tank (as I was moving it), hence it looking shoddy.”

He added that he only noticed the worm “because I had whole coral colonies missing after a single evening.”

Eunicids, found in warmer oceans across the world, can get to nearly 10 feet in length.

“This is Eunice aphroditois, otherwise known as a bobbit worm. Apparently around 20 years ago, an underwater photographer thought it and other species in the Eunice genus were reminiscent enough of the Bobbitt family incident of 1993 to warrant the nickname, according to a 2011 paper in Revista de Biología Tropical,” according to Scientific American’s description.

Scientific American then says the worm may have been named for the infamous incident between Lorena Bobbitt and her husband, but it really isn’t clear.

It adds: “It doesn’t really matter where E. aphroditois got its nickname from, because it’s fascinating enough without all the castration mythology. It lives on the sea floor at depths of 10 to 40 meters, and has five antennae to sense its prey, such as smaller worms and fish, which it catches with a complex feeding apparatus called a pharynx.”

This is Eunice aphroditois, otherwise known as a bobbit worm (named after the 1993 incident where Lorena Bobbitt chopped…

“The pharynx can turn inside-out, like glove fingers, and has strong, sharp mandibles on the end. Sometimes its prey is cut clean in half because of the speed and strength of E. aphroditois’ attacks, and it can inflict a nasty bite if a human gets too close.”

“Once the prey is caught, this long-living nocturnal worm will shoot back into its burrow to feed. It also feeds off seaweed and other sea plants and when prey is scarce, will scavenge for morsels around the surface of its burrow.”

According to the Underwater Photography Guide, Bobbit worms are nocturnal, it doesn’t seem to mind being closely approached, if you can get it to stay out, don’t touch it and don’t get grabbed as the claws are very powerful and can injure you, and the worm moves quite fast.

Marine Life Feature: Would you be afraid getting close to a Bobbit Worm ? Would you even notice it ?

Some worms can get as large as 9 feet in length.