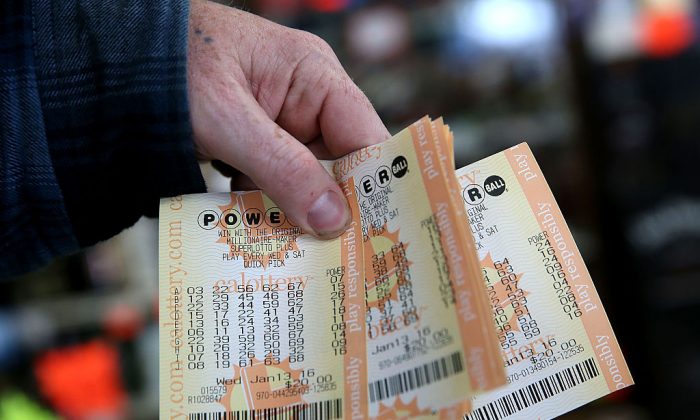 A customer holds a handful of Powerball tickets. (Photo by Justin Sullivan/Getty Images)
US

Amidst all the commotion over the largest lottery prize ever won last month, one man didn’t realize he also had a winning ticket.

Arthur Martin’s $1 million prize sat unclaimed for more than a week. Five of his numbers—6, 7, 16, 23, and 26—matched the Jackpot prize winner in the draw that took place on Aug. 23. He was only off by the Powerball number, which was 4.

Martin was the only $1 million Powerball winner in Virginia, WTOP reported.

After finally checking his ticket against the winning numbers, it took him an additional four days to overcome the shock.

“It was surreal. I thought I was just donating to the Virginia Lottery education fund,” said Martin in a Virginia Lottery press release. Sales from lottery games generated $500,000 for Virginia schools in fiscal-year 2017.

Martin, a building engineer, said he doesn’t really play Powerball often, but was enticed by the huge jackpot prize of over $700 million. The odds of winning the $1 million prize were one in 11.7 million, Inside Nova reported. A slim chance, but significantly better than the one in 292.2 million faced by the winner of the jackpot prize.

Martin eventually decided to check the ticket, as he bought a few other tickets he was going to check at the same time. He didn’t expect to be a winner.

The store where he purchased the ticket, Parkway Express in Lorton, Virginia, will receive $10,000 for selling the winning ticket.

Martin is going to use the money to pay off some of his debts, and spend some on himself and his family in the upcoming holiday season.

The jackpot winner was a 53-year-old mother from Massachusetts. Mavis L. Wanczyk chose the exact same numbers that came up in the Powerball draw, NTD Television reported.

She won the largest ever lottery prize of $758 million, although because she took a lump sum she receives only $443 million of that amount. The total after taxes was $336.3 million. The store in the city of Chicopee, where the purchased, is getting $50,000 for the winning sale.

With all the publicity Wanczyk has received for her win, police have increased patrols near her home.