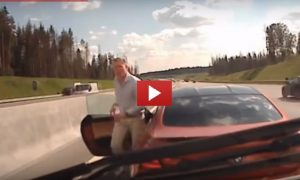 Man Blocks an Ambulance, Gets Into a Scuffle on the Roadway
0
Share Now
FacebookTweetParlerEmail
Copy Link

Police are investigating the death of a man who was suffering from heart problems just hours after he was turned away from a hospital, his wife said.

Spendi Rusitovski, 46, died in the back of an ambulance after he crashed his vehicle into a ditch. But, the medical examiner said it wasn’t the crash that killed him.

Some are wondering if his death could have been avoided.

A week before Christmas, Rusitovski and his wife went to Ascension SE Wisconsin’s hospital in Franklin because he was experiencing chest pains, the Journal Sentinel reported.

There was reason to be worried. In July, the auto repair shop owner had surgery to insert stents, which are typically used to help open arteries and reduce the chance of a heart attack.

During the Dec. 17 visit to the Franklin hospital, a sonogram test revealed “an issue” with Rusitovski’s chest pains, and his primary doctor wanted to admit him to the hospital “due to the serious nature of the sonogram results,” according to police and medical examiner reports.

But there was a problem as no beds were available. So Rusitovski was sent home. He was told that the hospital would call him when a bed was available, the report said.

But that call would come too late.

After the hospital visit, just blocks from his Oak Creek home, Rusitovski’s vehicle went off the road, crashing into a telephone pole and coming to rest in the ditch. He was a quarter-mile from his home.

“I noticed the lights were coming more towards me, and I swerved, and I saw him go down in the ditch and hit the pole,” Ashley Spitza who saw the crash said.

When the police arrived, Rusitovski was still alive. As he sat trapped in his SUV, Rusitovski told the police officers on the scene he was feeling chest pains and needed to get to an emergency room, reports said. By the time he was freed from the SUV and moved to a gurney, Rusitovski had lost consciousness. Life support was unsuccessful. He was declared dead in the back of the ambulance.

Rusitovski’s cause of death was “coronary artery disease,” the medical examiner ruled.

He arrived complaining of chest pains and was told he should go home and wait to hear from the hospital about a bed opening up.

After the incident, Rusitovski’s wife, Edina, retained an attorney to look into the cause of her husband’s death.

“We are further investigating the facts and circumstances preceding and surrounding the unfortunate and tragic demise of Mr. Rusitovski,” Wagner said.

When WISN 12 News asked an Ascension spokeswoman to verify that Rusitovski had been turned away from the hospital, her only reply was: “Out of respect for each individual’s right to privacy and to comply with applicable state and federal laws, Ascension Wisconsin is unable to comment.”

The Ascension facility in Franklin has the capacity to hold 52 beds. However, it currently only has 44 beds available, according to the Wisconsin Department of Health Services.

According to the company’s website, the Franklin facility has an emergency department capable of providing “early intervention for heart attacks and chest pain.”

Rusitovski’s case raises multiple questions under federal regulation. Under the law, patients cannot be turned away or transferred from a hospital until they are stabilized. Called the Emergency Medical Treatment and Labor Act, or EMTALA, the law was passed in 1986 to prevent “patient dumping,” the practice of hospitals turning away patients because of poor insurance or inability to pay.

How Doctors in China are Asked to Commit Murder