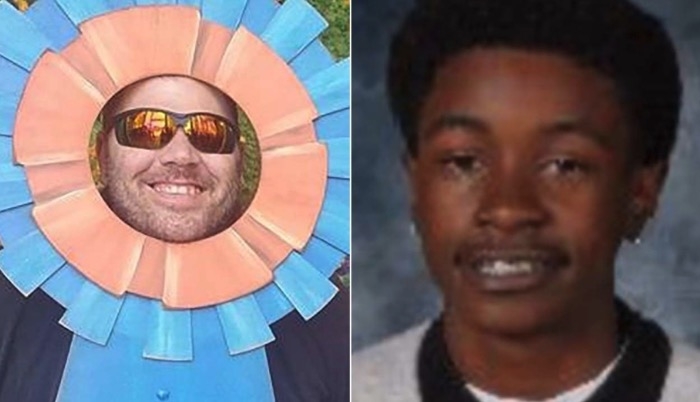 Patrick Smith (L) died on Nov. 22, after being shot the previous week while helping a neighbor during a burglary. Police are searching for suspect Leslie Hawkins (R), Barstow, Calif. (GoFundMe/Barstow Police)
Crime and Incidents

Man Dies After Being Shot While Checking Safety of Neighbor’s Home, Suspect at Large

A California man is dead after being shot at least eight times while checking on an elderly neighbor’s property after reports of a burglary.

Patrick Smith, 41, of Barstow, died from his injuries on Thanksgiving evening, about a week after the shooting, according to his wife, Elizabeth Smith, in an update posted on a GoFundMe page.

The married father of a young boy seemed to be pulling through after being hospitalized for his injuries, but suffered a setback Thursday morning.

“On Thanksgiving Day, surrounded by family, his health took a turn for the worst. He started vomiting inexplicable and a new round of CT scans were ordered for later in the day to investigate his lungs and intestines,” Elizabeth Smith wrote.

“My husband succumbed to his injuries early afternoon Thanksgiving Day. His heart and body could no longer take the stress,” she added.

Smith suffered extensive injuries due to the shooting.

The gunman has been identified by the Barstow Police Department as 18-year-old Leslie Hawkins. Police said in a statement he remains on the loose.

“Detectives were able to obtain surveillance video from the area that captured part of the shooting incident,” said Barstow Police Department chief Albert S. Ramirez Jr. “Detectives conducted further investigation and were able to identify the shooting suspect as Leslie Hawkins, an 18-year-old black male adult from Barstow. The video shows Hawkins fleeing from the scene on foot after the shooting.”

Hawkins is wanted on a charge of attempted murder.

Four other suspects, ages 15-17, were arrested near the scene and were booked into the San Bernardino County High Desert Juvenile Detention Center.

An elderly neighbor of Patrick Smith’s had just been burglarized and was afraid to go back into her house, so she asked the Smith family for help.

Elizabeth Smith said that when responding officers arrived, the suspects were still in the area.

“When the cops arrived one of the suspects fled and ran through our backyard,” she said of the Nov. 14 incident. “Patrick and I waited out front of our home for a while until we thought everything was clear.”

But when Smith approached the home to make sure the suspects had left, he was confronted by the assailants and shot eight times.

“Barstow Fire Protection District Paramedics responded to the scene and treated the victim,” the police statement reads. “Mercy Air transported the victim to Arrowhead Regional Medical Center due to the severity of his injuries.”

Elizabeth said her husband, who worked as a janitor, was always looking for ways to help others, Fox News reported.

“He’s best friends with everyone he knows,” she said. “He draws people in. He doesn’t care if you’re a janitor, like him, or whatever you are. I’m always like, ‘How are you so amazing all the time?'”

“My husband is the greatest man in the world,” she wrote before he died. “[He] has always put others before himself and would do this all over again for any of our neighbors, friends or family. He’s the one you can always count on, he’ll be there for you.

“I can’t imagine my life without this man. He’s everything to our son and I.”

“Our son, our families, friends, neighbors, and community are devastated that such a beautiful soul was taken from us far too soon,” she wrote. “I sincerely appreciate any and all support. Thank you.”

Barstow is about 115 miles northeast of Los Angeles.