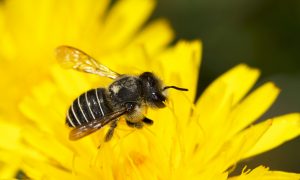 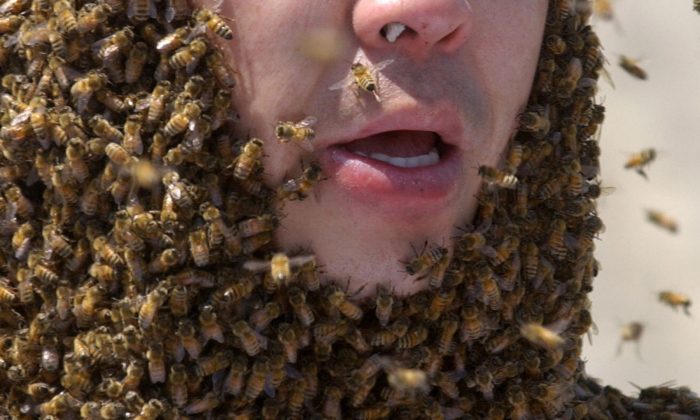 An Arizona man died after being attacked by a swarm of bees at his home, on April 7, 2019. (Jung Yeon-Je/AFP/Getty Images)
US News

Man Dies After Being Attacked by a Swarm of Bees, Found Covered in Hordes in Front Yard

A 51-year-old man died in his home in Arizona after being attacked by a swarm of bees on April 7.

At about 6:26 p.m. on Sunday, the Yuma County Sherrif’s Office (YCSO) received a report of a male victim being stung by a swarm of bees in the 9300 block of East Stetson Street.

Epigmenio Gonzalez was found in the front yard of his home covered with bees by deputies and Rural Metro Fire Department, said Sherrif’s Office in a statement on its Facebook.

Gonzalez was trying to remove a beehive from a couch in his backyard when the bees got agitated and attacked him.

After arriving at the scene, Rural Metro sprayed Gonzalez with water to let first responders remove him from the scene. He was transported to Yuma Regional Medical Center where he was pronounced dead.

A female victim at the same home was also stung by multiple bees and transported to the same hospital.

Several deputies from the sheriff’s office and officials from the Rural Metro were also stung but did not need any medical attention.

People responded with shock to Gonzalez’s accidental death on YSCO’s Facebook post. “Let this be a reminder to not take these things into our own hands as we don’t always know how large the hives can be. I implore you to call a professional,” said Keith Mithras.

A few gave suggestions about how to get rid of beehives. “Forget the hive. Bee traps work well. Set up a few and the size of the colony will shrink in days. Same goes for hornets,” said Jesus Saenz Jr.

How Lethal Are Honey Bees?

Bees are found throughout the United States and every year cause about 100 deaths, according to an article in The Conversation.

About three to four times more people die due to bee sting than due to snakebites.

This number is said to be an underestimate as many bee-sting-related deaths are wrongly attributed to heart attacks, sunstroke, and other causes.

On average, an adult can withstand more than 1,000 honey bee stings. What makes a honey bee attack lethal is not the bee venom but an allergy that results from the stings.

Bees release a chemical when they sting and this may attract other bees, according to the Center for Disease Control and Prevention (CDC).

If one gets attacked by many insects together, one should try to run away from them but it is better to not attempt to jump into water because some bees like Africanized honey bees are known to hover over water, continuing to sting once you surface for air, said CDC.