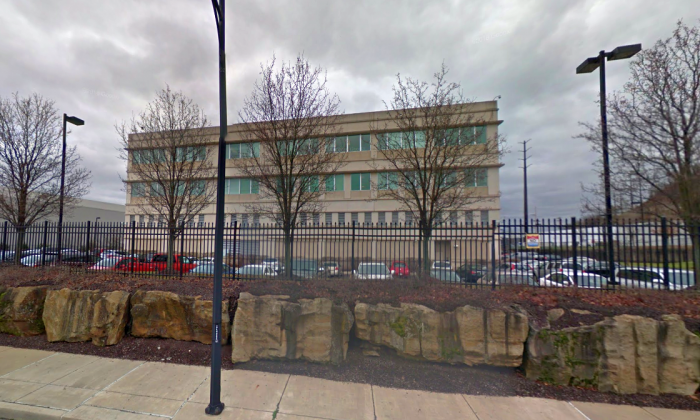 The FBI building in Pittsburgh (Google Street View)
US

A dump truck driver intentionally crashed his vehicle into the front gate of an FBI building in Pittsburgh on Tuesday, an FBI spokesperson has confirmed.

One person, apparently the driver, was hospitalized after the crash on Pittsburgh’s South Side, CBS Pittsburgh reported.

The driver was “apparently driving erratically in the area” of the crash, running several red lights and possibly a stop sign, Heeb said.

As a result, Pittsburgh police tried to initiate a traffic stop. “He failed to stop immediately. They pulled him over eventually, close to our building,” Heeb said.

During the stop, the driver “indicated to the officer that he was intending to ram the gate,” the spokesperson said.

Man rams truck at FBI Pittsburgh. What said to police before he did. #WTAE at 5 & 6 https://t.co/IoE8q4GKKB pic.twitter.com/14lkAHnkED

1 Injured As Truck Crashes Through Gates Of FBI Building On South Side – CBS Local https://t.co/eUQzfV3Uh9

“He did just that—put his truck back into gear, took off and went through the gate here at our headquarters,” Heeb added.

Officials are still attempting to determine the man’s motives. “We’re investigating it now with the Pittsburgh police,” Heeb told the Pittsburgh Tribune-Review.

“The vehicle is registered in Ohio. We don’t know too much about him at this point,” Heeb said.

Authorities believe the driver might have been doing gardening or lawn care work in the area, according to CBS Pittsburgh.

FBI spokesman Bill Crowley told Local10 TV that the incident doesn’t appear to be a threat.

But, “we take all these things very seriously,” Heeb told WPXI-TV.

The man’s identity wasn’t released. The bomb squad was deployed to investigate the vehicle as a precaution.