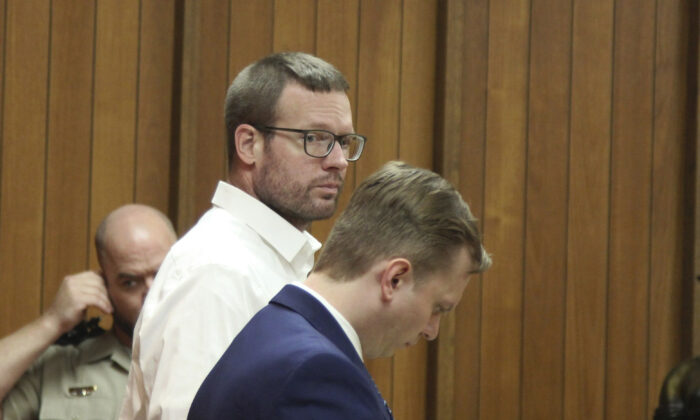 Michael Lang (L) stands with his defense attorney Konrad Kamizelich in Webster City, Iowa, on May 10, 2022. (Jeff Reinitz/The Courier via AP)
US News

Man Convicted of Murder in Killing of Iowa State Trooper

Michael Lang, 42, was also found guilty of attempted murder and assaulting a police officer for his actions on April 9, 2021, that killed 51-year-old patrol Sgt. Jim Smith in Grundy Center, a city of nearly 3,000 people about 60 miles (97 kilometers) northeast of Des Moines. He faces a mandatory term of life in prison without the possibility of parole when he’s sentenced.

Smith, a 27-year patrol veteran, was shot as he led a team of officers into Lang’s home in Grundy Center. Lang had barricaded himself inside the home after he assaulted another officer during a traffic stop that day, police said. Lang was also shot by officers but has recovered.

During closing arguments, Assistant Iowa Attorney General Douglas Hammerand called Smith’s killing premeditated and intentional, noting that Lang had kept police at bay for hours and that the trooper was shot in the chest at close range.

“You don’t shoot somebody where the defendant shot them with a loaded 12-gauge shotgun if it’s not intentional,” Hammerand said.

Lang’s attorney, Aaron Hawbaker, argued that because Lang did not shoot at officers during the standoff until they burst into his home, his actions didn’t support a first-degree murder conviction. Lang reflexively fired when he saw Lang pointing a gun at him, Hawbaker said.

Lang had a history of alcohol-related crimes and had run for sheriff of Grundy County a year before the shooting.

Lang’s trial was moved from Grundy Center to Webster City because of pretrial publicity.