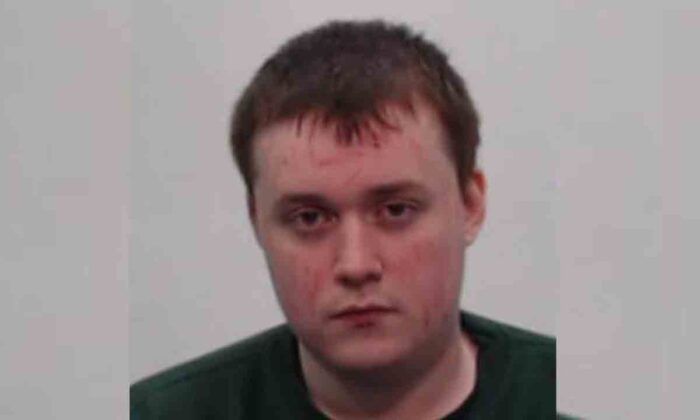 A man in Scotland convicted under Terrorism Acts has been jailed on Thursday for seven-and-a-half years.

Sam Imrie, a 24-year-old man from Glenrothes, Fife, was also put on the sex offenders register for ten years.

He’s subject to terrorism notification requirements for 15 years and was imposed a five-year serious crime prevention order which will start on the day of his release.

Imrie was found guilty on Oct. 27 of eight out of nine charges he faced, two of them were terrorism-related.

He made social media posts on Telegram and on Facebook which glorified terrorist acts by mass murderers Brenton Tarrant—who killed 51 people at two mosques in New Zealand in 2019—and Anders Breivik, who killed 69 people on the Norwegian island of Utoya in 2011.

He also had copies of The Great Replacement by Tarrant and a manifesto by Breivik—a “record of information” which is “likely to be useful” to someone preparing an act of terrorism.

Imrie was also convicted of possessing extreme pornography, including indecent images of children and an image involving a human corpse; arson; and drinking and driving.

But he was acquitted of a charge under the Terrorism Act of posting statements on Telegram suggesting he was going to attack the Fife Islamic Centre in his hometown and driving there with a can of petrol.

Jim Keegan QC, who represented Imrie, said that after posting the messages, his client filmed himself setting fire to a doorway at an abandoned lodge on July 4, 2019, and posted the video pretending it was a mosque.

He had also set alight a headstone at a cemetery in Markinch and made a video of the fire earlier on the same day.

Giving evidence in court, his mother Joyce Imrie said he told her: “Mum, I’ve done something really stupid, I pretended to set a mosque on fire.”

Police found weapons in his home including knives, a hammer, nunchucks, an axe, and a rifle scope.

During the trial, jurors heard that a laptop and phone were found in his bedroom with images of sexual activity with mutilated women in a folder named “dead girl pics.”

He also had a photograph of Adolf Hitler addressing a Nuremberg rally as his screensaver, “N***** Killer” as his password, and swastikas adorning his bedroom wardrobe.

In a statement to police on the day after Imrie’s arrest, his mother described him as “a loner who very rarely leaves his room.”

“He has no friends, no visitors to the house, no girlfriend that I’m aware of,” the statement reads.

Keegan told the court his client started to go off the rails at the age of 14 after he was attacked in a park and found it hard to attend school.

Sentencing Imrie at the High Court in Glasgow on Thursday, Lord Mulholland said he was “spreading hate” and told him to use his time in jail to “remove hatred from your heart.”

“Your conduct was despicable. You have no understanding or self-awareness of the hate you sought to spread,” Mulholland said.

“Walk around any city, town, or village and you will quickly find memorials to people of this country who gave their lives defending the freedoms you enjoy.”

The judge said the actions of mass murderers such as Breivik and Tarrant are to be “reviled,” adding, “You should use your time in jail to reflect on your conduct and remove hatred from your heart.”