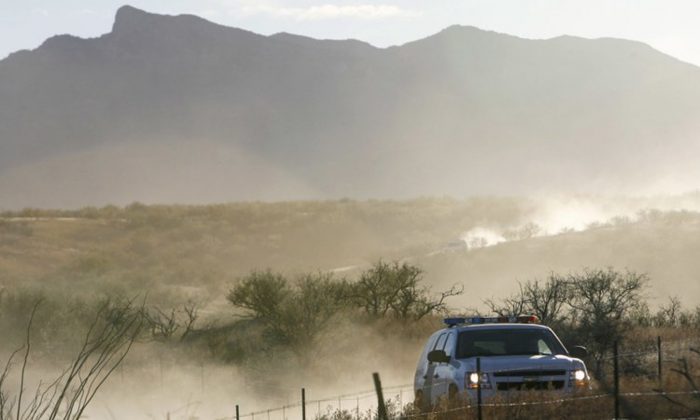 TUCSON, Ariz.—A man accused of pulling the trigger in the 2010 shooting death of a Border Patrol agent in the southern Arizona desert was convicted of first-degree murder and other charges on Feb. 12.

Heraclio Osorio-Arellanes also was found guilty by a United States District Court jury after brief deliberations on counts of second-degree murder, conspiracy to affect interstate commerce by robbery, attempted robbery, assault on four Border Patrol agents, and carrying a firearm during a crime of violence.

He’s scheduled to be sentenced April 29.

Osorio-Arellanes was among seven people charged in the Dec. 14, 2010, slaying of 40-year-old Border Patrol Agent Brian Terry north of Nogales, Arizona. He was arrested by Mexican authorities in April 2017 and extradited to the United States last August to stand trial.

Terry’s killing publicly revealed the “Fast and Furious” operation, in which U.S. federal agents allowed criminals to buy firearms with the intention of tracking them to criminal organizations. But the United States Bureau of Alcohol, Tobacco, Firearms, and Explosives lost track of most of the guns, including two found at the scene of Terry’s death.

The operation set off a political backlash against the Obama administration and prompted the agent’s family to sue.

Terry was part of a four-man team in an elite Border Patrol unit staking out the southern Arizona desert on a mission to find “rip-off” crew members who rob drug smugglers. They encountered a group and identified themselves as police in trying to arrest them.

The men refused to stop, prompting an agent to fire bean bags at them. They responded by firing from AK-47-type assault rifles. Terry was struck in the back and died shortly afterward.

“Agent Terry’s team encountered five individuals, at least two of whom were armed with rifles, in the ‘Peck Well’ area near Rio Rico, Arizona. During the attempt to arrest these individuals, the agents and suspects fired shots. Agent Terry was mortally wounded during the exchange of gunfire and succumbed to his injuries on December 15, 2010,” said a memoriam on the U.S. Customs and Border Protection’s website.

The memoriam mentions that Agent Terry was a native of Flat Rock, Michigan. He joined duty as a member of the 699th Session of the Border Patrol Academy on July 23, 2007. “After graduation, he was assigned to the Tucson Border Patrol Sector.”

“Prior to joining the Border Patrol, Agent Terry served in the U.S. Marine Corps and as a Police Officer in his home state of Michigan. Agent Terry is survived by his parents, his brother, and two sisters,” the memoriam said.

Five of the seven defendants charged in Terry’s killing are serving prison sentences after pleading guilty or being convicted in the case. One other man was arrested in October 2017 and still is awaiting trial.