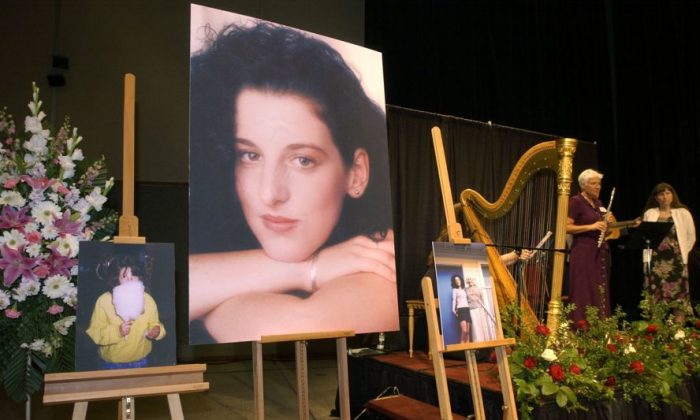 Photos of Chandra Levy are on display as musicians (R) stand by at the memorial service for Levy on May 28, 2002. (AP Photo/Debbie Noda)
Crime and Incidents

Prosecutors announced Thursday that they will not retry a man convicted of killing Washington intern Chandra Levy, saying they can no longer prove their case in the 15-year-old slaying that thrust former congressman Gary Condit into the national spotlight.

The U.S. Attorney’s Office for the District of Columbia issued a statement saying it has moved to dismiss the case charging Ingmar Guandique with Levy’s 2001 slaying.

According to the statement, prosecutors concluded they can no longer prove the murder case against Guandique beyond a reasonable doubt, “based on recent unforeseen developments that were investigated over the past week.” The statement does not elaborate, and Bill Miller, a spokesman for the U.S. Attorney, declined comment.

“After investigating this information and reviewing all of the evidence in this case, the government now believes it is in the interests of justice for the court to dismiss the case without prejudice,” prosecutors wrote in a one-page motion.

The California Democrat was at one point a prime suspect in the investigation, police acknowledged.

Police eventually cleared him, but Guandique’s lawyers tried to raise doubts about Condit at his 2010 trial.

Levy’s remains were found in Washington’s Rock Creek Park in 2002. Prosecutors argued her death fit a pattern of attacks Guandique committed on female joggers. He was found guilty in 2010 and sentenced to 60 years in prison.

But Guandique was granted a new trial last year after doubts were raised about a jailhouse snitch, Armando Morales, who was the key witness at Guandique’s trial. Morales testified that Guandique confessed to the killing.

Defense lawyers have argued, though, that Morales lied during the trial and that prosecutors knew or should have known the testimony was problematic.

Condit testified at trial that he didn’t kill Levy but evaded questions about an intimate relationship saying, “We’re all entitled to some level of privacy.”

Abbe Lowell, a lawyer who has represented Condit, did not immediately return a call seeking comment Thursday.

Prosecutors say that as a result of their action Guandique, who is from El Salvador, will be released to the custody of U.S. Immigration and Customs Enforcement and faces deportation.