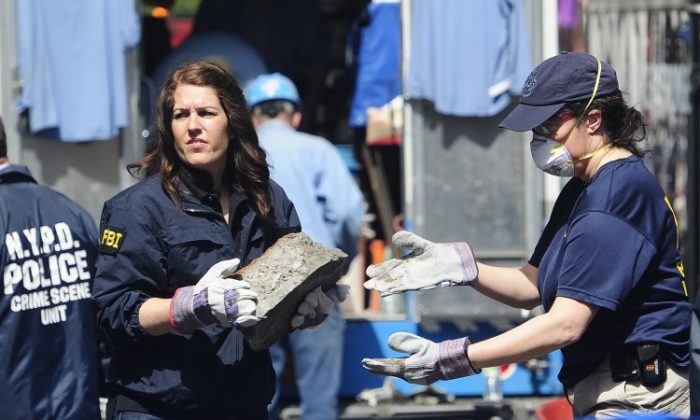 New York police and FBI agents remove pieces of concrete after digging up a basement believed to contain clues to the unsolved disappearance 33 years ago of 6-year-old Etan Patz, in New York. On Wednesday a man from New Jersey confessed to the murder of the boy. (EMMANUEL DUNAND/AFP/Getty Images)
US

NEW YORK—A man has confessed to the murder of Etan Patz, a boy who disappeared in Manhattan exactly 33 years ago on May 25, 1979, according to local media, citing the New York Police Department.

The suspect admitted to strangling the boy after luring him into a basement, Police Commissioner Raymond Kelly said at a press conference on Thursday evening, according to NBC New York.

The confession is a new development in an investigation that has spanned more than three decades. The unknown fate of the boy triggered a nationwide missing children movement that included putting his photo on milk cartons and sparked a discussion on the safety of children in public.

After following a tip, a man named Pedro Hernandez, 51, was arrested in New Jersey on Wednesday and questioned at Manhattan’s district attorney’s office.

“In the years following Etan’s disappearance, Hernandez had told a family member, and others, that he had ‘done a bad thing’ and killed a child in New York,” Kelly said.

In 1979, the year of Patz’s disappearance, Hernandez was 18 years old and worked as a stock clerk in the same neighborhood, according to CBS New York.

He confessed to luring the boy with a soda into the basement of the bodega where he worked, and strangling him there. He put the corpse into a plastic bag, and disposed it with the trash, Kelly said.

Hernandez will be charged with second-degree murder, while it is “unlikely” that the body ever will be found, Kelly said.

“This was a tragedy that broke the hearts of millions of people, especially parents across this nation,” Mayor Michael Bloomberg said at a press conference on Thursday, according to the Gothamist.

Six-year–old Etan Patz vanished on his way to the school bus in the SoHo neighborhood, the first time he had walked alone. In April 2012, the NYPD excavated a Manhattan basement following a fresh lead, but found no evidence.

Hernandez was already questioned in 2010 when the case was reopened but statements he made then had contradicted known facts.

Hernandez’s confession comes just a couple days before the 33rd anniversary of Patz’s disappearance on May 25. This day is also National Missing Children’s Day, which has been commemorated since May 25, 1983.

“There is no rest for a parent who has lost a child, and there should be no rest for any of us who are in a position to help. There may not be any words we could offer that would ease their pain, but we can and will offer our support—and all the tools at our disposal to help families of missing and exploited children,” Deputy Attorney General James Cole said on Wednesday at a ceremony at the Justice Department marking the day.