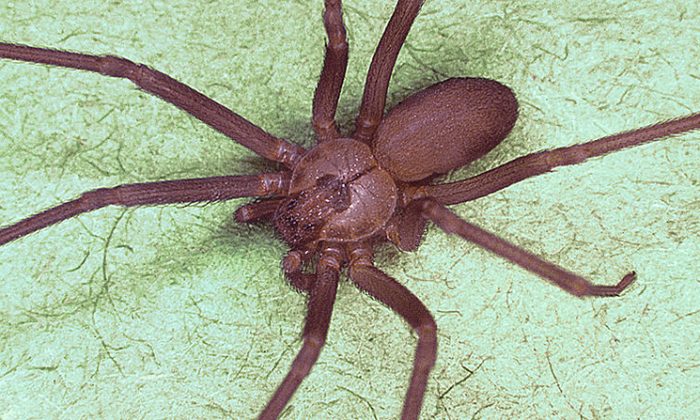 The brown recluse spider is small, but exceedingly poisonous. (Centers for Disease Control)
US News

Man Claims He Was Bitten by Brown Recluse on Plane, Says Lawsuit

A Mississippi man who said that he was bitten by a brown recluse spider while on an American Airlines plane in 2016 has filed a lawsuit against the airline.

He claimed that a flight attendant on the flight downplayed the venomous spider as a mosquito, prompting the suit, according to the Mississippi Clarion-Ledger. Brown recluse spider bites can lead to infections, necrosis, and permanent scars.

Marcus Fleming, of Natchez, was a passenger on Flight 3978 on Sept. 6, 2016, when he was bitten before taking off, the lawsuit says. The suit was transferred to a federal court in Jackson, Mississippi, from the Rankin County Circuit Court on Monday, the Clarion-Ledger reported

“After he was bitten, he alerted the flight attendant that something had bitten him but she responded that it was probably a mosquito,” according to his lawsuit. “After landing Mr. Fleming noticed that the pain in his hand became extremely painful and his thumb changed colors.”

According to Fleming, a doctor told him that he would need surgery or he would lose his thumb.

“American Airlines is a commercial airline and owed a duty to the public, including Fleming, to exercise due care on its flights to ensure the area in which their passengers sat were safe,” the lawsuit said.

The plaintiff is now seeking $500,000 in damages, according to the suit. It also named Jackson-Medgar Wiley Evers International Airport as a defendant.

The brown recluse is found in the Midwest and the southern United States.

“The brown recluse belongs to a group of spiders commonly known as violin spiders or fiddlebacks. The characteristic fiddle-shaped pattern is located on the top of the leg attachment region (cephalothorax). Because they are secluded and withdrawn, as their name implies, the brown recluse avoids open spaces,” according to the U.S. Occupational Safety and Health Administration agency. “Brown recluse spiders are dangerous and they can bite and inject toxic venom.”

They’re golden brown and often have a “dark violin/fiddle shape” on the leg attachment region. The brown recluse has six eyes instead of eight eyes like most spiders, the agency says. The recluse’s eyes are arranged in pairs on either side.

The bite can cause a “systemic reaction within 24 to 36 hours characterized by restlessness, fever, chills, nausea, weakness and joint pain,” the agency adds. “Tissue at the site of the bite and the surrounding area dies and eventually sheds.”