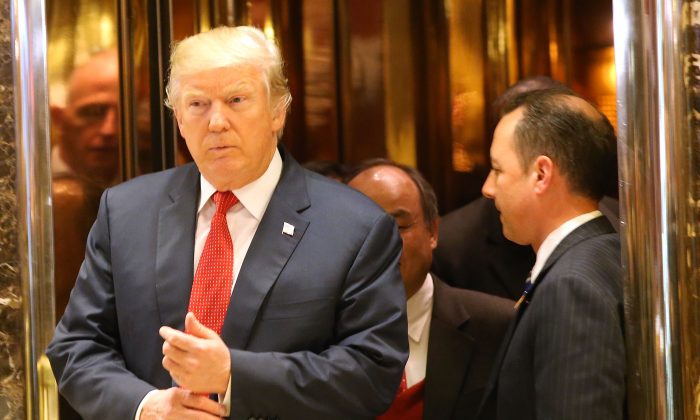 President-elect Donald Trump walks out of an elevator speak to the media at Trump Tower in New York City on Dec. 6, 2016. (Spencer Platt/Getty Images)
International

A report is saying that President-elect Donald Trump saved an autistic girl’s life back in 1989.

According to an uncorroborated account written in French news magazine Paris Match, Yves Cohen, a shop owner in the Caribbean island of Guadeloupe, said Trump rescued his 16-year-old daughter, Sina Cohen, who is severely autistic and needs to be accompanied at all times—26 years ago.

“It was in the afternoon of winter 1989 at my seasonal home in Terre-de-Haut, located in the Îles des Saintes islands in Guadeloupe,” Yves Cohen wrote for the magazine, adding that he was in his “exotic clothing store” trying to sell merchandise to customers.

But just then, he added, “I heard screams” and rushed to “see Donald Trump … holding my daughter Sina … who is struggling and wet.” Trump yelled at Yves, he recalled. “You’re the father?” he asked, noting Trump was angry. “You’re crazy to leave her alone!” Trump was quoted as saying by the man.

After that, Yves said that he didn’t understand much of what Trump told him but he appeared to call him names. Trump was “red and looked shocked, as if a tragedy had happened,” he said. “I didn’t now yet he just saved my daughter’s life.”

“Sina has a severe form of autism,” he explained, adding she “must always be accompanied. But the care assistant who was with her that day had to leave to go to the bathroom.”

So when she was left alone, the girl attempted to go out to the ocean but slipped and fell into the water, he said.

As Sina was struggling, Trump heard her and intervened, Yves claimed.

“He dove into the water fully clothed to get her out of there,” he said, adding Trump was “the only one who responded.”

Trump apparently was on the island with his yacht, the Trump Princess, as it was docked nearby.

And, as Yves put it, Trump was “impossible to miss because of his stature and his inimitable look.”

“Without him,” his daughter “had no chance to escape,” he concluded. “There were many people on the terrace of Café Navy where he was sitting and he was the only one who responded. And for that I say thank you.”