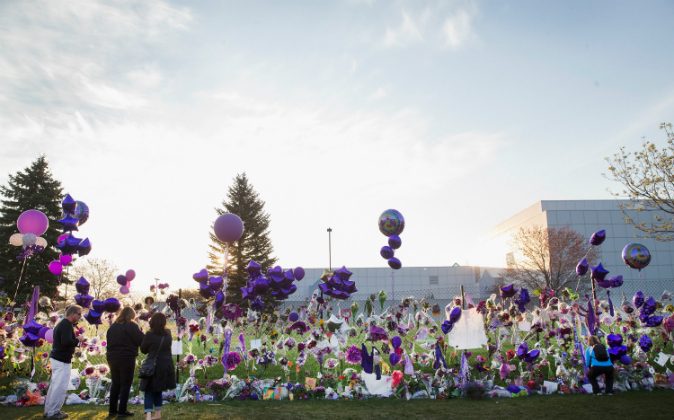 Music fans visit a memorial created outside Paisley Park, the home and studio of Prince, on April 23, 2016, in Chanhassen, Minnesota. Prince, 57, was pronounced dead shortly after being found unresponsive in an elevator April 21 at Paisley Park. (Scott Olson/Getty Images)
Entertainment

There is now a name for one of the hundreds that have come forward claiming to be related to the late musician, Prince—Carlin Q. Williams.

Williams is claiming the “Purple Rain” musician is his biological father and has filed a petition in Carver County District Court in Chaska, Minn. on May 9, for a paternity test.

He also asked the court to determine that he is the “the sole surviving heir.”

In an affidavit filed on Monday, Williams’ mother, Marsha Henson, claimed that she met Prince in July of 1976 at a hotel in Kansas City, Missouri. The two subsequently engaged in sexual intercourse and conceived Carlin Q. Williams. Williams was born on April 7, 1977.

Williams is reportedly in a Colorado federal prison for weapons offenses.

Prince passed away on April 21, after he was found unresponsive in the elevator of his 50,000 sq. ft sprawling home. Since his passing, a lot of questions have surrounded the singer’s death—speculations on what caused the death of the musician and to who and how will the hefty inheritance be divided.

“Our phone has been ringing off the hook, I would say we have received between 600 and 700 calls,” Genealogy researcher, Harvey Morse told the Daily Mail. “They run the gamut, literally from “We lived in the same area so we must be related”, to “We have pictures of Prince at our family reunion.”

Prince is survived by no known children, one full sibling—Tyka Nelson—and several half-siblings.

Mayte Garcia is one of two ex-wives of the singer and was the mother of Prince’s only known son, Boy Gregory. The infant died from Pfeiffer syndrome, a rare birth defect that affects the skull, shortly after his birth in 1996.

“I loved him then, I love him now and will love him eternally,” she said. “He is with our son now.”