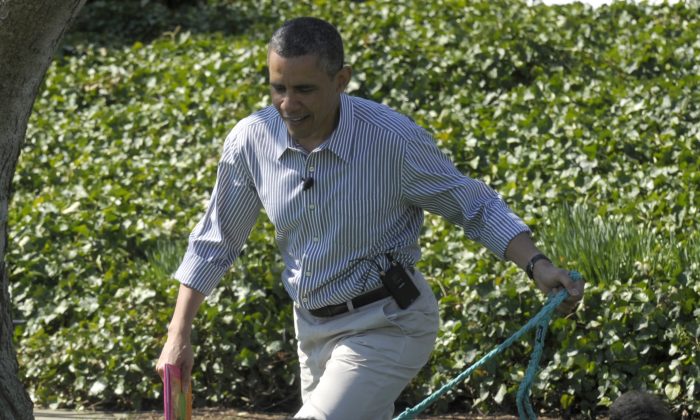 President Barack Obama arrives with his dog Bo, a Portuguese Water Dog, to read Chicka Chicka Boom Boom during activities at the annual Easter Egg Roll on the South Lawn of the White House in Washington, Monday, April 1, 2013. Bo was a present from Ted Kennedy. (AP Photo/Susan Walsh)
US

A North Dakota man who allegedly claimed to be Jesus was arrested for plotting to abduct Bo, President Obama’s family dog, officials said.

Scott Stockert of North Dakota was arrested earlier this week in Washington, D.C., after ammunition and unregistered guns were found in his vehicle. He was staying at a Hampton Inn near the Washington Convention Center.

A local police officer tracking him down following a tip from the Secret Service, NBC Washington reported. Agents headed to the hotel after getting a “be on the lookout” alert from the agency’s Minnesota office about the kidnapping plan.

Stockert allegedy said, “You picked the wrong person to mess with. I will f— your world up,” when he was arrested, Politco reported

Secret Service agents questioned him, and it was reported that he said he went to Washington to advocate $99-per-month health care. Stockert said he wanted to announce he was running for president.

He told agents his parents were John F. Kennedy and Marilyn Monroe, according to court documents.

my xmas present to u all is this pic of Bo Obama sniffing a boom mic #merryChrimmus #UrWelcome pic.twitter.com/0jr0jpyOFx

In his truck was a 12-gauge shotgun and a bolt-action rifle. Officials also found around 300 rounds of .22-caliber long-rifle bullets and 71 12-gauge shells. He also had a machete and an 18-inch billy club.

Headline: Man Arrested in Plot to kidnap Bo Obama How article ends via @thehill Let’s just call it a week everyone pic.twitter.com/lYh3gwiky7

Later, when he was transported by cops, he told officials he was Jesus and could verify his identity on his license. The license, however, identified him as Scott Stockert.

The judge ordered Stockert released under a high-intensity supervision program until he heads to court at a later date. He was ordered to stay away from the White House, the Capitol, and nearby areas. He’s also barred from possessing real or imitation weapons, the Washington Post reported.