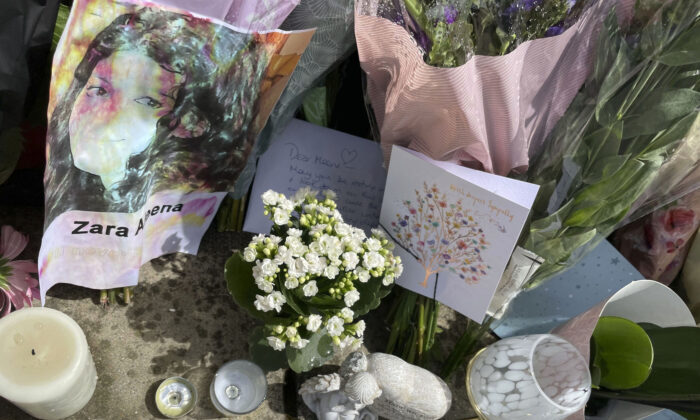 Floral tributes, candles and cards left at the scene on Cranbrook Road where Zara Aleena was murdered on in the early hours of Sunday June 26, 2022, in Ilford, England, on June 29, 2022. (Ted Hennessey/PA via AP)
UK

Man Charged With Woman’s Killing on Streets of London

LONDON—A man was remanded in custody Wednesday after appearing in a London court charged with the murder and attempted rape of a woman who had been walking home alone in east London.

It was the latest in a string of similar incidents that have heightened concern over the safety of women and girls on the British capital’s streets.

Jordan McSweeney, 29, is charged with the murder of 35-year-old Zara Aleena, who was attacked after a night out in Ilford in the early hours of Sunday.

McSweeney, who is also charged with attempted rape and robbery, spoke only to confirm his name and details during a brief hearing at the Thames Magistrates’ Court.

In a statement, Aleena’s family mourned her death and called for an end to violence against women. They highlighted the killings of other women who were targeted by strangers in London and elsewhere.

The family expressed sympathy to the families of Sarah Everard, Sabina Nessa, and others who were killed in recent months and whose deaths prompted widespread protests calling for more protection for women and girls.

The family said Aleena, a law graduate who was training to become a lawyer, “walked everywhere” and “believed that a woman should be able to walk home.”

“Sadly, Zara is not the only one who has had her life taken at the hands of a stranger. We all know women should be safe on our streets. She was in the heart of her community, 10 minutes from home,” their statement said.

McSweeney was denied bail and remanded in custody until he is due to appear at London’s Central Criminal Court on Jul. 27.

A march remembering Aleena is planned in Ilford on Saturday.