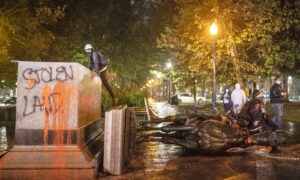 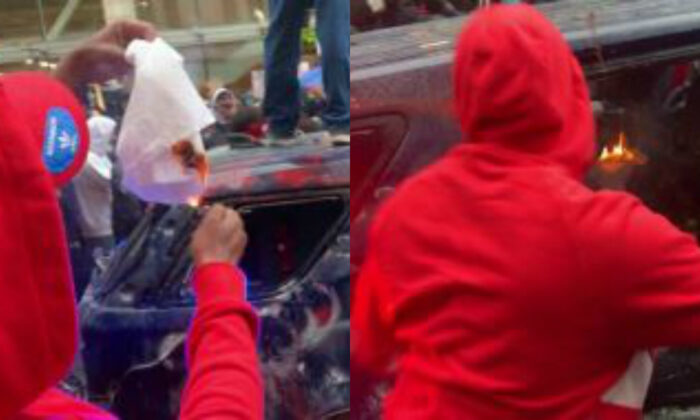 A suspect later identified as Tyre Means Jr. is seen setting a paper towel on fire and thrusting it into a police cruiser in Seattle on May 30, 2020. (ATF)
Crime and Incidents

Man Charged With Stealing Police Rifle, Setting Car on Fire During May Riot in Seattle

A felon from Georgia convicted of domestic violence was charged this week for stealing a police rifle and setting a police car on fire during a riot in late May in Seattle.

Tyre Wayne Means Jr. was due to appear in federal court on Oct. 15 on four charges—arson, possession of a stolen firearm, and two counts of unlawful possession of a firearm. All are felonies.

According to the criminal complaint, a black male wearing a red hooded sweatshirt and a red cap, both with Adidas logos, along with red sweatpants, red shoes, and a distinctive tattoo under the corner of his left eye, held a paper towel and lit it with a lighter before placing it into the back seat of the police cruiser during the riot.

Other people added items onto the flames to fuel the fire. People also sprayed lighter fluid into the car, threw an incendiary device inside, and burned the vehicle with an aerosol can and lighter.

Means was also captured on surveillance footage reaching into a different vehicle and pulling out a rifle from a bag, even fighting another person who tried to grab him or the rifle, according to the criminal complaint.

Soon, though, he got into a fight with another male and dropped the rifle bag on the ground, where it was picked up by someone else.

The bag was returned to a Seattle precinct by an anonymous subject.

A review of video footage and photographs led police to a woman who was in close proximity to the suspect. Officers identified her through social media photographs and a driver’s license.

A search of a criminal database showed the woman was protected by a restraining order against a Tyre Wayne Means. A booking photograph of Means showed the man seen in footage, police officers said, drawing attention to the facial tattoo.

Means had told his community corrections officer that he recently filmed a music video. The footage showed him in the video, which appeared to have been filmed in Seattle. He also wore the same rings that the suspect in the arson was wearing.

There were also a number of social media photographs of Means and the woman together.

Because of his criminal history in Georgia, Means was prohibited from possessing firearms.

“This is just the latest in a series of cases where our office has brought federal criminal charges related to civil disorder, and should be a wake-up call for those who think they can commit crimes hidden by a crowd,” U.S. Attorney for the Western District of Washington Brian Moran said in a statement.

“Federal law enforcement and local police are piecing together publicly available video and photographic evidence to identify and ultimately prosecute those who thought they could escape accountability for their actions. In this case it means a felon, who is legally barred from possessing firearms, now faces tough federal sanctions.”

No lawyer was listed for Means.

The defendant faces up to 50 years in prison if convicted.