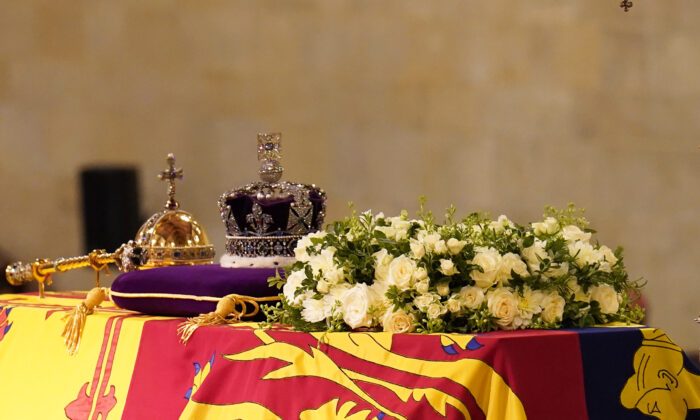 The coffin of Queen Elizabeth II, draped in the Royal Standard with the Imperial State Crown and the Sovereign's orb and sceptre, lying in state on the catafalque in Westminster Hall, at the Palace of Westminster, London, on Sept. 17, 2022. (James Manning/PA Media)
UK

A man has been charged after he moved out of the queue of mourners and approached Queen Elizabeth II’s coffin in Westminster Hall on Friday night.

“Muhammad Khan, 28, of Barleycorn Way, Tower Hamlets, was charged on Saturday, Sept. 17, with an offence under Section 4A of the Public Order Act; behaviour intending to cause alarm, harassment or distress,” London’s Metropolitan Police said in a statement.

Khan will appear in custody at Westminster Magistrates’ Court on Sept. 19, the force said.

The incident occurred around 10 p.m. on Friday, as the live feed from inside the hall cut away for a brief period.

According to eyewitnesses and video footage, a man, who was in the queue of people filing past the coffin, rushed to the catafalque, pushing aside a seven-year-old girl on the way. He seemed to have touched the coffin and lifted the Royal Standard before being tackled to the ground by police officers.

Eyewitness Tracey Holland told Sky News that her seven-year-old niece Darcy was trying to look at the crown when “some person decided they were going to push her out the way, run up to the coffin, lift up the standard, and try to do I don’t know what.

“Darcy was grabbed out of the way. And the police had him within two seconds,” she said.

Jon Williams, also an eyewitness, told MailOnline that the man stood in the queue for 14 hours but kept to himself, unlike the others in the queue who talked to each other.

It comes after a 19-year-old man allegedly exposed himself and pushed mourners from behind as they waited in line at Victoria Tower Gardens on Wednesday.

The man, later identified by the Met as Adio Adeshine, was charged on Friday with two counts of sexual assault and two counts of breach of a sexual harm prevention order.

He was remanded in custody and is due to appear at Southwark Crown Court on Oct. 14.

Since Wednesday evening, hundreds of thousands of mourners have joined the miles-long queue to pay respects to the Queen.

On Sunday morning, the government warned people not to set off from their homes to join the queue as it is due to close shortly afterwards.

The Department for Culture, Media and Sport (DCMS) said: “A decision will be taken today on when entry to the queue for Her Majesty The Queen’s Lying-in-State will close as it reaches final capacity.

“Queue times are already 13.5 hours and may increase. To avoid disappointment please do not set off to join the queue.”