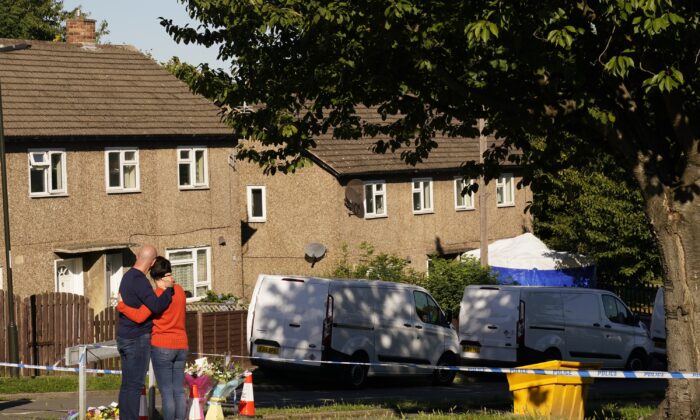 The father to some of the victims leaves flowers at the scene, where four people were found dead at a house on Sunday, in Chandos Crescent, Killamarsh, near Sheffield, England, on Sept. 20, 2021. (Danny Lawson/PA)
UK

Man Charged With Murder of Killamarsh Mother and 3 Children

A 31-year-old man has been charged with four counts of murder after a mother and three children were found dead in a house.

The bodies of John Paul Bennett, 13, Lacey Bennett, 11, their mother Terri Harris, 35, and Lacey’s friend Connie Gent, 11, were discovered at a property in Chandos Crescent in Killamarsh, near Sheffield, on Sunday morning.

Derbyshire Police said Damien Bendall has been charged with their murder and remains in custody.

The force said the four bodies were found after police responded to a call about concerns for the safety of a man at the address at 7:26 a.m.

Police had previously said officers did not have any prior contact with those involved.

Bendall, of Chandos Crescent, will appear at Southern Derbyshire Magistrates’ Court in Derby on Wednesday.

Derbyshire Constabulary established an online portal on Tuesday for people to submit footage in relation to the deaths.

The public can report information or send CCTV, doorbell video, or dashcam footage directly to the investigation team.

Meanwhile, officers also disclosed that the man now named as Bendall was taken to hospital with self-inflicted minor injuries.

Detective Chief Inspector Sally Blaiklock, who is leading the investigation, said: “Our thoughts remain with the families of Terri, John Paul, Lacey, and Connie—as well as the communities that have been affected by this most tragic of incidents.

“A large scene remains in place on Chandos Crescent and local residents will see an increased police presence in the area over the coming days, including patrols by officers in the local area.

“I would urge anyone who is concerned about the incident to speak to officers in the area or use the online reporting tool to pass information in confidence.”