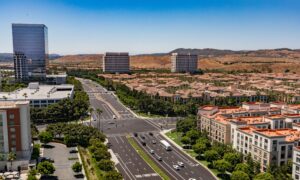 SANTA ANA—A 45-year-old Lake Forest man is behind bars on a murder charge for allegedly beating his longtime spouse to death with a tire iron as she was arriving for work as a family’s nanny in Irvine, prosecutors said March 23.

Omar Velazquezhuar is charged with murder a special circumstances allegation of lying in wait, which makes him eligible for the death penalty or at least life in prison without the possibility of parole if convicted at trial.

The two had been together for 23 years, but it was unclear if they were married, said Deputy District Attorney Mark Geller.

The two had split up and the defendant was allegedly jealous that the victim had “moved on” and was seeing someone else, Geller said.

The victim had been working for an Irvine family for three years as their nanny and had arrived at work about 7 a.m. when the defendant confronted her, Geller said.

The defendant, who had parked his car around the corner, used a tire iron to bludgeon her, Geller alleged.

The victim was taken to a hospital in critical condition and Velazquezhuar was charged on March 1 with attempted murder. When the victim died on March 17 the charges were upgraded to murder on that date.

After the attack, the defendant fled the scene and was found about 7:45 a.m. at Vetrina and Spirito by police and was arrested then, police said.

Velazquezhuar is scheduled to be arraigned April 16 in the jail courtroom in Santa Ana. He was being held without bail.