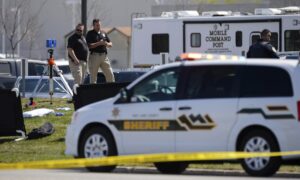 SANTA ANA, Calif.—A man was charged July 9 with scooping up a 6-year-old in Placentia and attempting to run away with the child before bystanders confronted him.

Michael Christopher Foley, who has no known address, was charged with a felony count of kidnapping a child younger than 14 and a misdemeanor count of child annoyance.

Foley, 41, is accused of picking up the youngster outside of Peewee’s Market, 703 W. La Jolla St., about 7:50 p.m. July 5, Placentia police Lt. Chris Anderson said. Police said the victim was a boy, but the criminal complaint lists the victim as a girl.

The child was outside the store with some family friends when Foley, who was driving by, stopped and got out of his vehicle, leaving the driver’s door open, and ran toward the victim, Anderson said. He picked up the child and was carrying the victim back to his vehicle when bystanders shouted at him, Anderson said.

Foley kissed the child on the cheek and said, “I love you, baby,” before putting the victim down and getting back into his vehicle and driving away, Anderson said.

Police were able to identify Foley through surveillance video, the lieutenant said. Foley, who was arrested July 6 in Orange, has no ties to the child or the victim’s mother, Anderson said.