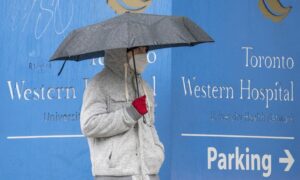 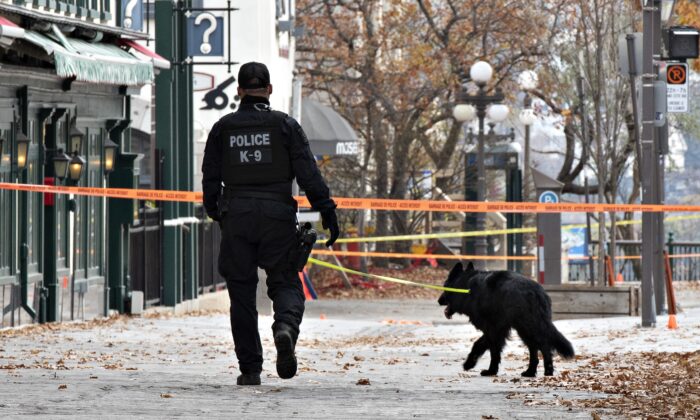 Girouard appeared before a judge via video−conference this afternoon, with another hearing scheduled for Thursday.

Quebec City Police chief Robert Pigeon said earlier in the day that a suspect dressed in “medieval” garb had swung a katana−like sword at randomly chosen victims during an attack that went on for nearly 2.5 hours.

Police identified the two Quebec City residents who died in in the attack as 56−year−old Francois Duchesne and 61−year−old Suzanne Clermont.

Neighbours are holding impromptu vigils in Quebec City to honour the victims, while tributes have poured in from across Canada in support of their families and loved ones.

“Last night we were thrust into a night of horror when a 24−year−old man who does not live in Quebec City came here with the clear intention of taking as many victims as possible,” Police chief Robert Pigeon said during a Sunday morning news conference.

Pigeon said the suspect has no criminal record, but that “in a medical context” five years ago, he had shared his intention to commit this type of act. He said the investigation is ongoing.

Five people who were injured in the attack were also residents of Quebec City, Pigeon said. He said some of those injured suffered lacerations he described as serious, but said no one is in life−threatening condition.

The bustling sector of Old Quebec where the rampage unfolded was quiet Sunday, with large portions blocked off as part of the massive police probe. The police chief noted the investigation involved around 25 different crime scenes.

Some residents out for their morning stroll said they heard the sirens and could see flashing police lights on Saturday night.

Stanislas Thomassin, who lives just 300 metres from where one of the attacks took place, said a friend noted alerts on social media on Saturday night but they didn’t make much of it.

“This morning, I got a note from a friend in France in a panic about me, that’s when I realized the horror of what had happened,” Thomassin said. “It’s normally very calm, very peaceful in Old Quebec.”

Surveying the police−taped streets in and around the historic neighbourhood, Michel Proulx, another local, was at a loss.

“Definitely out of the ordinary,” said Proulx as he walked his dog on Sunday. “I saw the flashing lights, but had no idea it could be this.”

Condolences poured in from across Canada for the victims and their families, with Prime Minister Justin Trudeau saying in a tweet that his “heart breaks” for them.

Federal Conservative Party leader Erin O’Toole and Jagmeet Singh, leader of the New Democratic Party, also offered their condolences, while Quebec Premier Francois Legault said the entire province had woken up after a “night of horror.”

“I don’t have the words to describe such a tragedy,” Legault said in an early−morning tweet.

Francois Paradis, president of the Quebec legislature and a National Assembly member representing Levis, Que., near Quebec City, said Sunday that the flag outside the legislature would immediately be lowered to half−mast.

Quebec City Mayor Regis Labeaume said the attack has shaken the city, which is still recovering from a deadly shooting at a local mosque in 2017.

Quebec Public Security Minister Genevieve Guilbault echoed the sentiment, describing herself as “devastated” after the attack.

“We went from a happy Halloween day with our kids, with our neighbours, to a tragedy,” she said during the news conference.

“We love to think (of) Quebec City as a safe place, as a quiet place, as a happy place—and it is. But we unfortunately face sometimes that kind of tragedy.”