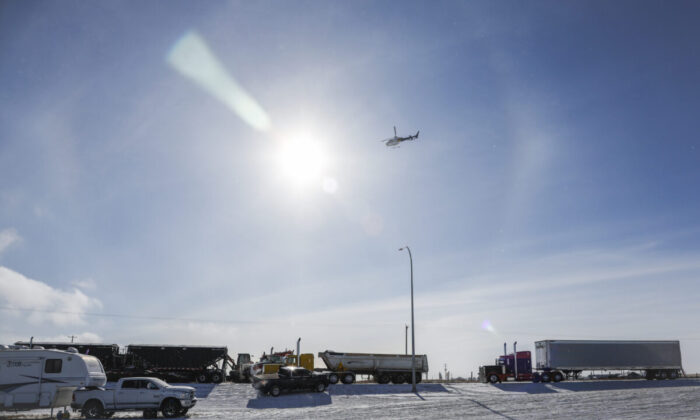 An RCMP helicopter flies over as a truck convoy demonstrating against COVID-19 mandates continues to block the highway at the U.S. border crossing in Coutts, Alberta, on Feb. 2, 2022. (Jeff McIntosh/The Canadian Press)
Canada

A man charged with conspiracy to commit murder at a border blockade in southern Alberta has been denied bail by a judge.

Chris Carbert, 45, appeared by video in the Court of Queen’s Bench in Lethbridge on May 27 to hear the decision after a bail hearing last week.

Reasons for Justice Johnna Kubik’s ruling are protected by a publication ban.

Carbert and three other men are accused of conspiring to kill police officers at a blockade near Coutts, Alberta, in protest of COVID-19 vaccine mandates and other pandemic restrictions.

One of the men, Christopher Lysak, who is also charged with uttering threats, possession of a weapon, and mischief to property over $5,000, was denied bail March 2.

Anthony Olienick’s bail decision is to come June 9 after a hearing Friday, and Jerry Morin also remains in custody.

Crown prosecutor Matt Dalidowicz had indicated in April that the plan was to try the four men together.

They are to return to court on June 13.

The protest near Coutts began in late January and lasted for over two weeks.

Thirteen people were charged on Feb. 14 after the RCMP uncovered 13 long guns, handguns, multiple sets of body armour, a machete, a large quantity of ammunition, and high-capacity magazines in three trailers.

RCMP also said a semi-truck and farm tractor attempted to ram a police cruiser on Feb. 13.

“The group was said to have a willingness to use force against the police if any attempts were made to disrupt the blockade,” the law enforcement agency said in a press release on Feb. 14.

Marco Van Huigenbos, an organizer of the Coutts border protest, said at the time that their protest had nothing to do with the individuals arrested by the RCMP. To maintain the narrative that the protest and the protesters were peaceful, he decided to end the blockade.

“We want to wrap this up in a peaceful way,” said Van Huigenbos in a video message, posted by Rebel News reporter Syd Fizzard on Twitter the evening of Feb. 14.

“After the … news released that the RCMP made arrests and [came] forward with an arrest, resulted in long-arm firearms, handguns, and protective equipment, … we, as the Coutts convoy, have decided that as a peaceful protest, and to maintain that narrative, we will be rolling out tomorrow morning at 10 a.m.”

The protest at the Coutts border crossing was one of several demonstrations inspired by the Freedom Convoy encamped in Ottawa, which began in opposition to the federal government’s vaccine mandate for cross-border truck drivers.

The first convoys converged in Ottawa on Jan. 29, and many protesters had indicated they would stay until all COVID-19 mandates were lifted. The movement then mushroomed to include supporters from across the country who oppose all pandemic mandates and restrictions imposed by governments.

Van Huigenbos said at the time he hoped their protests had started something that would have “wide-reaching effects” on the governments at all levels.

“That governments will continue to go back to the grassroots, listen to the constituents, and that these mandates, these restrictive mandates will soon be eliminated,” he said.

On Feb. 15, the Canada Border Services Agency confirmed operations were resumed at the Alberta-U.S. crossing.