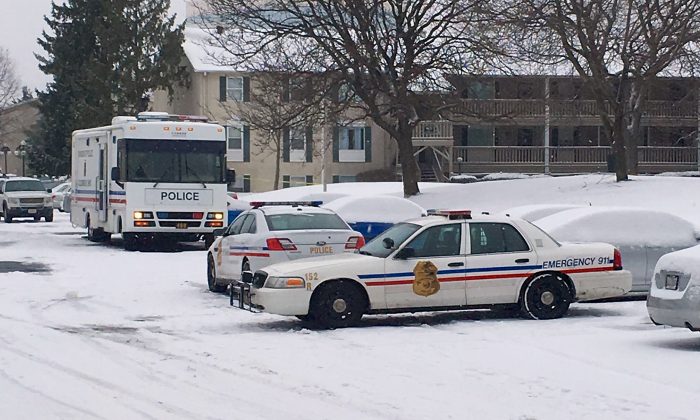 Police vehicles and crime scene tape surround an apartment complex, Tuesday, Jan. 12, 2016, on the north side of Columbus, Ohio, where police say a woman's ex-boyfriend forced his way into her apartment early Tuesday and fatally stabbed her and her two children before being critically injured in a knife fight with her current boyfriend. (AP Photo/Mitch Stacy)
Crime and Incidents

Man Charged in Fatal Stabbings of Woman, Her 2 Kids in Ohio

COLUMBUS, Ohio—A woman’s ex-boyfriend forced his way into her apartment early Tuesday and fatally stabbed her and her two children before being critically injured in a knife fight with her current boyfriend, police said.

Officers were called to the sprawling apartment complex on the north side of Columbus just before 1:30 a.m. and found the woman and children already dead and the two men with stab wounds, police Sgt. Rich Weiner said.

RIGHT NOW: 3 counts of murder filed against Wendell Louis Callahan for the stabbing deaths of his ex-girlfriend & her daughters ages 7 & 10

The slain victims were identified as Erveena Hammonds, 32, and her daughters, 10-year-old Anaesia Green and 7-year-old Breya Hammonds.

Erveena Hammonds’ ex-boyfriend, 35-year-old Wendell Louis Callahan, arrived at the apartment, forced his way in and killed her and the children before her current boyfriend, Curtis Miller, showed up and the two men scuffled, Weiner said.

“Officers followed a blood trail and found what appears to be the suspect with multiple stab wounds,” Weiner said.

Callahan was hospitalized in critical condition. He has been charged with three counts of murder in their deaths.

Miller wasn’t seriously hurt. He was treated at a hospital and released, police said.