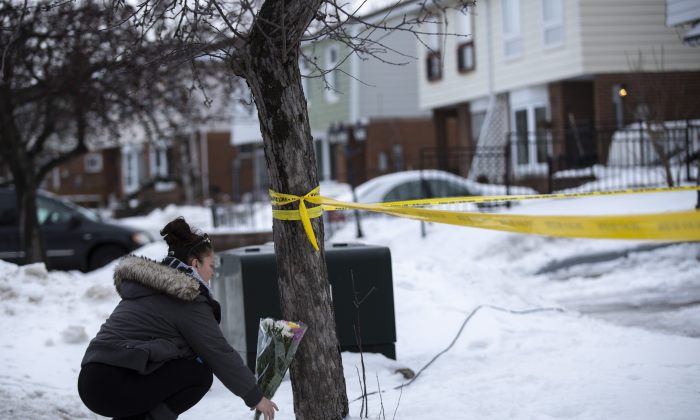 Local resident Jennifer Fuller places flowers at the scene outside of a house where a young girl was found dead in Brampton, Ont. on Feb. 15, 2019. (The Canadian Press/Andrew Ryan)
Canada

Man Charged in Daughter’s Death in Hospital With Self Inflicted Gunshot Wound: Police

Police say a man charged with first-degree murder in the death of his daughter is in hospital with a self-inflicted gunshot wound.

Roopesh Rajkumar, 41, was charged in 11-year-old Riya Rajkumar’s death after the girl’s body was found in his Brampton, Ont., home shortly after an Amber Alert was issued late Thursday night.

Peel regional police say they were contacted by Riya’s mother after the child’s father failed to return her home from her birthday celebrations.

Police say Rajkumar was arrested by provincial police shortly after Riya’s body was found and was taken to hospital for injuries.

Marttini says Rajkumar was then brought to a hospital, where the gunshot wound was discovered.

She says details of the injuries weren’t immediately released because investigators were still gathering information.

Officers say the province’s police watchdog was notified of his injury, but decided to not investigate the circumstances surrounding it.

Marttini says police are not releasing further details about the Rajkumar’s injuries.

She says police are also not releasing information on Riya’s cause of death.

Police say Rajkumar is in custody, and will have a court appearance once his doctors say he is well enough.