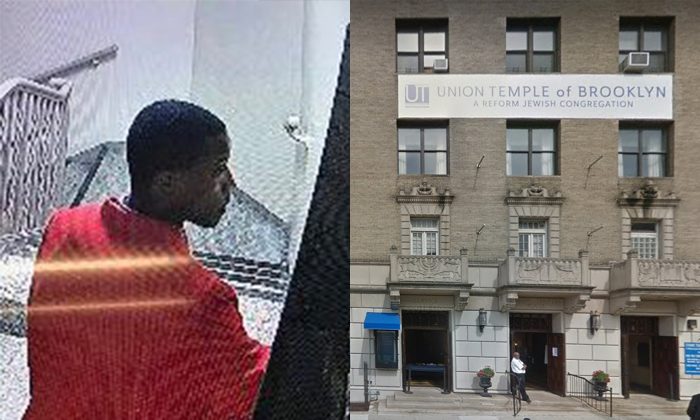 James Polite, 26, was arrested on Nov. 2 after anti-Semitic messages found in a synagogue in Brooklyn, New York. (NYPD; Google Maps)
US News

A 26-year-old man was arrested on Nov. 2, after anti-semitic messages were found in a synagogue in Brooklyn, New York.

James Polite was charged with four counts of criminal mischief as a hate crime and making graffiti. He was sent to a psychiatric hospital, WABC-TV reported.

NYPD said that Polite entered the Union Temple, and wrote anti-Semitic statements in black marker throughout the building on Nov. 1.

“There’s no place for hate in NYC,” the NYPD tweeted.

There‘s no place for hate in NYC.

WANTED FOR AGGRAVATED HARASSMENT: On 11/1 at 8:30 pm, the suspect entered 17 Eastern Parkway (Union Temple) in #Brooklyn and wrote anti-Semitic statements in black marker throughout the building. Call @NYPDTips at #800577TIPS with any info. pic.twitter.com/8HHU0uupCP

The graffiti Polite allegedly left included “Kill all Jews,” “Hitler,” and some other horrible offensive messages.

Union Temple administrator Ross Brady told the New York Daily News that the hate crime has spurred the house of worship to move ahead with most of its programs and services.

Many people on social media pointed out that Polite was likely an ex-canvasser for former president Barack Obama.

“He wrote ‘Kill all Jews’ in the synagogue. [He] was an Obama canvasser, big supporter of Alexandria Ocazio-Cortez and Kamala Harris,” Daily Wire contributor Harry Khachatrian wrote in a Twitter post.

He wrote "Kill all Jews" in the synagogue. Was an Obama canvasser, big supporter of Alexandria Ocazio-Cortez and Kamala Harris.
Are we going to get any coverage on this from the media? Or did he have to be a Trump fan for that https://t.co/Pr01tRUV8S

In a 2017 article, the New York Times profiled James Polite as a man who grew up in the foster care system, volunteered for Obama’s presidential campaign, and once worked with Christine Quinn when she was the City Council Speaker.

Quinn said she know the arrested Polite in a statement after the incident.

“I know this young man,” she said.

She denounced Polite’s actions as “indefensible” and “inexcusable.”

Quinn also partly confirmed the guess on social media as she said the suspect “grew up in and out of the foster system.”

According to NYPD, 290 hate crimes were committed in the city so far this year, around half of them being anti-Semitic cases.

“I am disgusted by the discovery of anti-Semitic graffiti at a house of worship in Brooklyn. At a time when the nation is still reeling from the attack at the Tree of Life synagogue in Pittsburgh, New Yorkers stand united with the Jewish community and against hate in all its forms. In New York, we have zero tolerance for discrimination in our laws or in our spirit,” New York Governor Andrew Cuomo said in a statement as he directed the Hate Crimes Task Force to investigate the incident.

“The disgusting rhetoric and heinous violence in this nation has reached a fever pitch and is ripping at the fabric of America, and it must stop. In New York, we have forged community through chords of commonality and we will always stand together against hate and discrimination,” he added.

Less than a week before the Brooklyn anti-Semitic incident, 11 people were killed in the Tree of Life Synagogue in Florida, on Oct. 27. Six others, including four officers, were injured in the incident.

Robert Bowers, the 46-year-old suspect, walked into the synagogue yelling “All Jews must die” before he opened fire, the Epoch Times reported.

Bowers pleaded non-guilty to all the charges after a grand jury issued a 44-count indictment charging him with murder, hate crimes, obstructing the practice of religion, and other crimes. He could be put on death row if convicted.