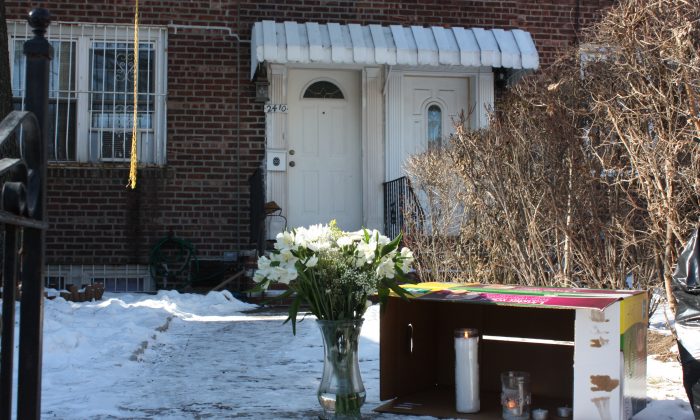 Flowers and candles in front of 24-10 87th St., in East Elmhurst, Queens, New York, on Jan. 29, 2014, where Estrella Castaneda and her daughter Lina Castaneda were found dead around midnight on Jan. 28. Carlos Amarillo has been charged with their murders. (Jane Gray/Epoch Times)
New York

Man Charged for Beating Two Women to Death in Queens

NEW YORK—A man has been charged for hammering to death his girlfriend and her daughter in their Queens home.

Carlos Amarillo, 44, said that he believed both of the victims were witches and were performing voodoo and casting spells on him, according to statements he made to the police.

The victims of his violent hammering were his girlfriend Estrella Castaneda, 56, and her daughter, Lina Castaneda, 25. They were both found dead with head trauma in their home on 87th Street, East Elmhurst, police said. A rubber grip of a hammer was found at the scene by the mother’s body. And a partially concealed hammer was found by the daughter’s body.

Lina Castaneda’s 7-year-old daughter was found in her mother’s bedroom. She is now staying with her father, the police confirmed. She was not harmed during the attacks.

Queen’s District Attorney Richard Brown said that Amarillo called 911 around 12:10 a.m. Wednesday morning and said, “Two females are dead. They were assassinated. Hurry they are dead. I killed them because they are witches. I want the police to kill me. I killed them with a hammer.”

He was also seen walking to the street from his doorway with a bible in hand saying, “I killed them. I killed them.”

Norma Jimenez, 62, who has lived across the street since 1976 described the Castanedas as “excellent ladies.”

Jimenez, who is part of Community Board 3 placed candles and flowers in front of 24-10 87th St., as a tribute to the women’s deaths.

“I’m very sorry to hear it. I’m wondering about her little girl,” she added.

Arnoldo Parra, the uncle of the girl’s father said, “They were amazing women.”

A neighbor, Camilo Alvarez, two doors down from the scene recalled, “I used to see them all the time.” His brother, 15-year-old John Givirica said he heard banging Tuesday night. “It sounded like someone was hitting the wall,” he said.

Jimenez said that Estrella Castaneda and Lina Castaneda will be mentioned and remembered at Thursday Mass at Our Lady of Fatima church in East Elmhurst. A date for the memorial service is yet to be confirmed.