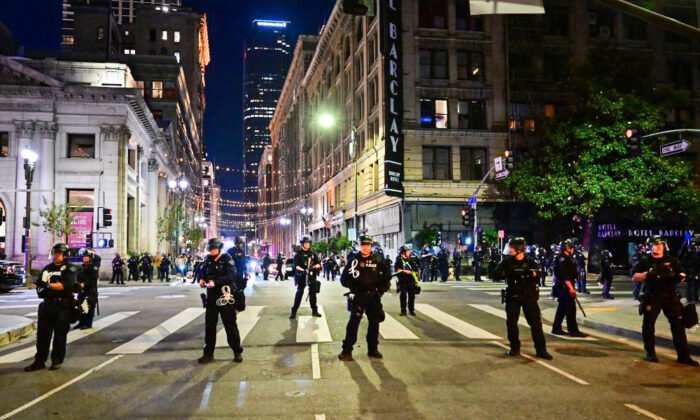 LOS ANGELES—A man who allegedly fashioned a makeshift flamethrower out of a spray-paint can and lighter and hurled it at a police officer during a downtown abortion-rights march was charged Tuesday with two felony assault counts.

Michael Joseph Ortiz, 30, was charged with one count each of assault with intent to commit mayhem and assault upon a peace officer or firefighter, along with allegations that he personally used a deadly weapon and that he had two prior convictions in 2016 for resisting an executive officer.

It was not immediately clear when Ortiz would appear at the downtown Los Angeles courthouse for arraignment.

“That is a very troubling development and one that we’ll watch closely,” Moore told the city’s Police Commission on June 28. “And I look to the [District Attorney’s] Office … for their help and support in the full prosecution of this individual who was involved in this terrible attack on officers.”

Ortiz was arrested during Friday night’s protest, which began as a rally against the U.S. Supreme Court’s decision striking down Roe v. Wade, the 1973 precedent that largely legalized abortion in the United States.

The police chief said Ortiz was carrying five cans of spray paint, suggesting a plan to repeatedly use the makeshift weapon.

“He was not there for any lawful protest or demonstration regarding the Supreme Court’s decision,” Moore told the commission.

Moore, who said an officer suffered slight burn injuries on his hands from the suspect’s use of the flamethrower, again lamented “the infusion of a small disruptive group into an otherwise largely peaceful and law-abiding group.”

Moore said “fringe or extreme groups or individuals” will take advantage of peaceful gatherings to “create chaos and turmoil.”

Overall, he said protests that erupted following Friday’s court decision have been largely peaceful, with the exception of people marching onto freeways Friday evening and some clashes involving the flamethrower and pyrotechnics.

He said five officers were injured during the protests, including the officer burned by the flamethrower. Another officer was injured by people setting off pyrotechnics, and one officer was struck by a large rock thrown from the crowd, Moore said.

According to Moore, there were a total of six rounds of less-than-lethal munitions fired by officers during the protests, all on Friday night. One was fired at the suspect wielding the flamethrower, with others fired at a person throwing a bottle containing an unknown liquid toward officers, one trying to take an officer’s baton, and one at a person throwing a pyrotechnic device.