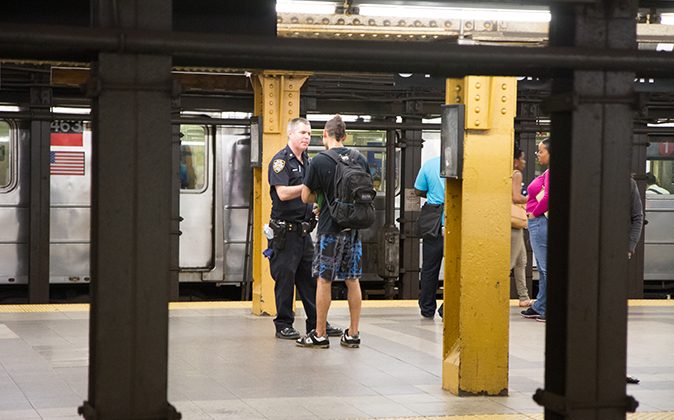 A young man is stopped by a New York police officer at the 34th Penn station subway station in Manhattan on Aug. 7, 2012. Recently, the chief medical examiner's office ruled a homicide in the case of a man who caused a disturbance while high on PCP and died after police restrained him and transported him to a hospital. (Benjamin Chasteen/The Epoch Times)
Crime and Incidents

The second death of a New Yorker after a physical police arrest this summer has been ruled a homicide, according to a ruling by the Office of Chief Medical Examiner.

Just four days before the controversial death of Staten Island man Eric Garner after an officer placed him in a chokehold, Ronald Singleton, 45, had been placed in a body wrap, according to a police report. The wrap is a device used to restrain agitated individuals.

On Saturday, the city’s largest police union, the Patrolmen’s Benevolent Association (PBA), said the police are not at fault for Singleton’s death. After Garner’s death, PBA also denied that the police were at fault, denying the officer had used a chokehold, a practice banned by the NYPD since 1993.

Singleton died of “physical restraint by police during excited delirium due to acute phencyclidine [PCP] intoxication,” according to the medical examiner’s office. PCP is a recreational hallucinogenic drug.

Singleton was cursing and screaming, “acting overly irate and irrational” in the back seat of a taxicab in Midtown Manhattan shortly after midnight on July 13, according to the police. The taxi driver called over a patrolling police officer for help.

When Singleton attempted to fight the officer, the officer called for additional cops, who then restrained him with a “protective body wrap,” according to the police report.

The police said Singleton was not under arrest, but taken to Bellevue Hospital for evaluation as an emotionally disturbed person.

Emergency medical staff were in the process of transporting him to the hospital when Singleton went into cardiac arrest inside the ambulance. He was brought to Roosevelt Hospital instead, the closest hospital location, where he was pronounced dead on arrival.

PBA president Pat Lynch addresses the death in custody of a man on PCP. http://t.co/C6pVl4eLRS

“The responsibility for the outcome lies entirely with the drug abuser not the police officers attempting to remove him as a danger to the public and himself,” PBA President Patrick J. Lynch said in a statement.

Police routinely respond to these types of incidents involving emotionally disturbed people, PBA spokesman Al O’Leary told the Epoch Times. Dozens of times each day, police get concerned calls from the public and deal with the individuals “repetitively without injury,” he said.

Our members follow department protocols designed to best insure the safety of the drug abuser and of the police officers, said Lynch.

The NYPD’s policing methods have been the subject of intense debate following the death of Garner, which was captured by a passerby on video that was widely viewed by the public. Garner’s passing sparked citywide protests of police brutality and of the “broken windows” brand of policing that criminalizes minor offenses to deter people from committing major crimes.

According to a police source quoted in the Daily News, no disciplinary action has been taken against the officers involved in subduing Singleton, but the Internal Affairs Bureau is investigating the incident. In Garner’s case, where the medical examiner’s homicide ruling was made weeks ago, Staten Island District Attorney Daniel Donovan has called for a grand jury to consider charges against the arresting officer.

In the video of the altercation between Garner and police, Garner could be seen resisting arrest, albeit mildly. He could also be heard repeatedly shouting, “I can’t breathe!”