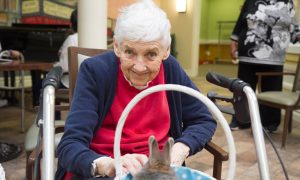 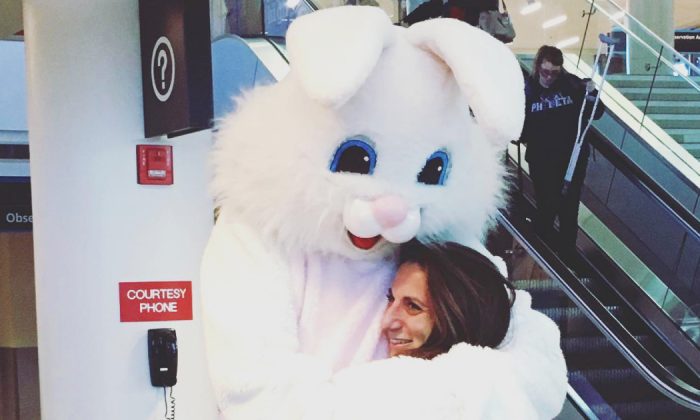 MANCHESTER, N.H.—A Londonderry man decided to surprise his loved one by showing up at the airport in a bunny costume to celebrate his wedding anniversary.

Mark DeAngelis revealed this was the second time he had worn a bunny suit, having previously worn a similar costume to propose to his wife Jolene during a family Easter egg hunt back in 1998.

DeAngelis went to the Manchester-Boston Regional Airport dressed as a bunny on March 19 to meet with Joelene and their daughters Audrey and Amanda, who were returning from a vacation to Florida.

“That whole thing bought me a lot of points for a lot of years. Now I need to restock those points,” DeAngelis told WMUR-TV. “So the plan for today is to recreate that moment as best I can.”

DeAngelis brought a new ring and placed it in a larger silver egg inside an Easter basket for the couple’s 20th anniversary.

“It’s platinum because it’s our platinum anniversary,” he said. “I’m going to ask her for another 20 years at least.”

The moment Jolene saw the 6-foot, 8-inch-tall bunny hop towards her she could not help but laugh as she came down the escalator.

As Joelene approached, the bunny kneeled-down and presented her the basket.

Once she realized it was a ring, she shouted “Yes!” as onlookers realized what was happening and gave a round of applause.

Gotta feeling she said yes! #RelationshipGoals #HusbandOfTheYear @flymanchester Where did he get the ring? It’s gorgeous! #Platinum https://t.co/OLAwDUZgT3

Joelene was moved to tears and was completely caught off-guard by the grand gesture.

It’s not every day you see a 6-foot, 8-inch-tall bunny waiting for arrivals at Manchester-Boston Regional Airport. But Mark DeAngelis wanted to do whatever it took to make his wife smile. https://t.co/rQIfZ0yJZi

The daughters were also surprised to see such a tall bunny propose to their mother.

“It’s just my parents and I love them so much and I thought it was so sweet of him to think of her and do this for her,” Amanda said.

DeAngelis credits the well-matched suit for helping him show his romantic side and bring back fond memories from more than 20 years ago.

“The bunny suit is almost identical, especially the head,” he said. “The head is perfect.”