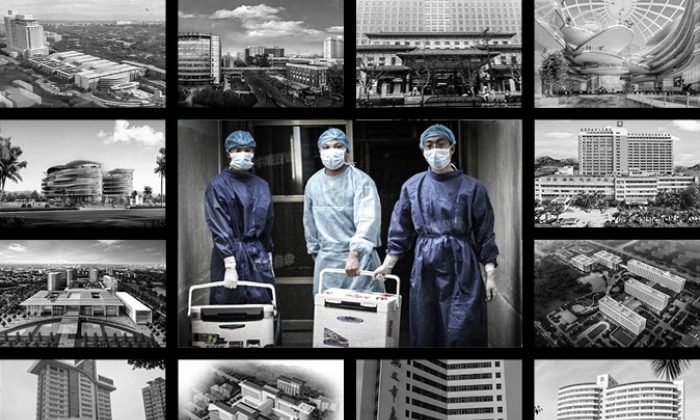 Some of the more than 700 transplant hospitals across China. The image in the centre shows doctors carrying fresh organs for transplant at a hospital in Henan Province on Aug. 16, 2012. (The Epoch Times)
China Human Rights

That evening, Liu’s son went to the brainwashing center in China’s Hebei Province where his mother was being held and saw that no bedding had been provided for her, so he went home to fetch a comforter.

When he returned the next day, she was gone. Only her shoes remained.

That was in August 2002, and Liu, a Falun Gong adherent, hasn’t been seen since.

Liu’s husband, You Shuchen, questioned the director of the brainwashing center as to what happened, but he claimed he didn’t know. The local authorities also said they had no idea of Liu’s whereabouts, and when You tried all the relevant government agencies, he was given the runaround, according to Minghui.org.

Over the next 15 years, Liu’s family spent much time and money looking for her, but never found a trace.

When You learned in 2017 that many Falun Gong adherents incarcerated in China are being subjected to forced organ harvesting, he felt sure he knew why his wife disappeared—she had been killed for her organs years ago.

Falun Gong, or Falun Dafa, is an ancient practice based on the tenets of truthfulness, compassion, and tolerance whose adherents have been suffering a relentless campaign of persecution launched by the Chinese regime in July 1999.

That’s why Liu was arrested, like tens of thousands of other adherents that have been mistreated and tortured in detention centers, labor camps, brainwashing centers, and prisons since the persecution campaign began, with untold numbers of deaths, according to Minghui, a website that documents the Falun Gong persecution.

To add insult to injury, independent researchers released an investigative report in 2006 showing that Falun Gong prisoners of conscience have been having their organs forcibly removed while still alive to fuel China’s lucrative transplant industry.

A follow-up report in 2016 titled “Bloody Harvest/The Slaughter: An Update” revealed that 60,000 to 100,000 illicit transplants per year took place in China between 2000 and 2016. The victims include Falun Gong adherents, Uighurs, Tibetans and house Christians—with the majority by far being Falun Gong prisoners of conscience.

The perpetrators are officials of the Chinese Communist Party (CCP), acting in collaboration with surgeons, prison authorities, and military officials, the report found.

“The Communist Party’s demonization and brutalization of Falun Gong and the health system’s insatiable demand for organs have formed a symbiosis. Each feeding on the other, the combination became an unprecedented, and barely imaginable, human catastrophe,” the report stated.

The researchers found that the 700 transplant hospitals across the country have had the capacity to perform more than a million transplants since 2000.

According to the China Organ Harvest Research Center, China began conducting research and clinical experiments in human organ transplantation in the 1960s, but it wasn’t until 2000 that the industry entered a period of exponential growth—which coincided with the start of the CCP’s campaign against Falun Gong.

A 2019 report by the center found that China’s transplant industry “has grown exponentially and become the most prolific in the world in several years despite the lack of voluntary organ donation system until 2010, and the paltry number of donations since then.”

“This dramatic increase in transplant volume was facilitated, in great part, by the CCP’s campaign to eradicate Falun Gong,” the report said.

As for Liu, her family searched for her all over the country, to no avail. If her husband is right, she became a victim of the Chinese regime’s macabre practice of killing innocents in order to harvest their organs while still fresh and sell them for profit—something that has been described by Canadian human rights lawyer David Matas, one of the authors of the “Bloody Harvest” report, as “a new form of evil on the planet.”