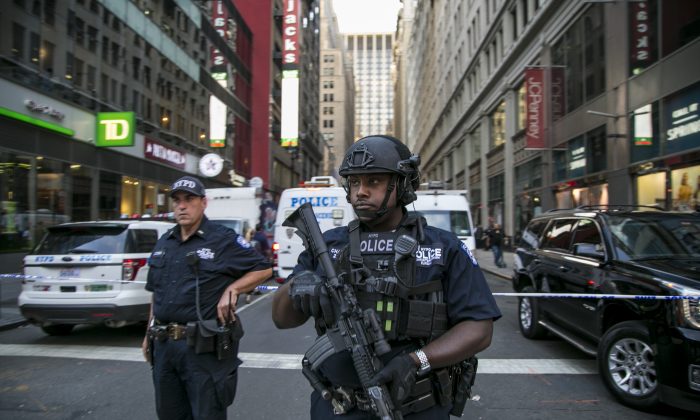 New York Police Officers are on the scene where a man was shot by the police after attacking them with a meat cleaver near the Manhattan Mall on Sept. 15, 2016. (Samira Baouaou/Epoch Times)

A man who was shot by police near Manhattan’s Penn Station, after he struck an off-duty detective with a meat cleaver was initially stopped because he was trying to remove a boot from a vehicle that he was apparently living in, an NYPD spokesperson said.

The incident took place at 32nd Street and Sixth Avenue at around 5 p.m. local time.

As the officers approached him, Joudeh pulled out an 11-inch meat cleaver and ran, police said. A group of officers chased him, and at one point shot him with a Taser, with no apparent effect.

Two NYPD officers were injured in the incident, and one suffered a laceration. A second officer is being treated for a graze wound.

The officers are expected to survive.

NYPD officers shot the suspect, who has been described as being in critical condition.

Pierre Damico was shopping on 32nd street when he heard five or six bangs “like a firecrackers” right outside the store.

“All of a sudden everybody from the store took off,” he said. He says he stayed inside the store, afraid that he would get shot if he went outside. “You don’t want to get killed,” he said.

Police fired 18 shots, striking Joudeh at least twice. He was hospitalized Thursday night in critical but stable condition, police said. The detective was being treated for a six-inch gash from his temple to his jaw.

Editors note: While on the scene, an NYPD spokesperson stated the weapon was originally a hatchet, but later confirm it was a meat cleaver.