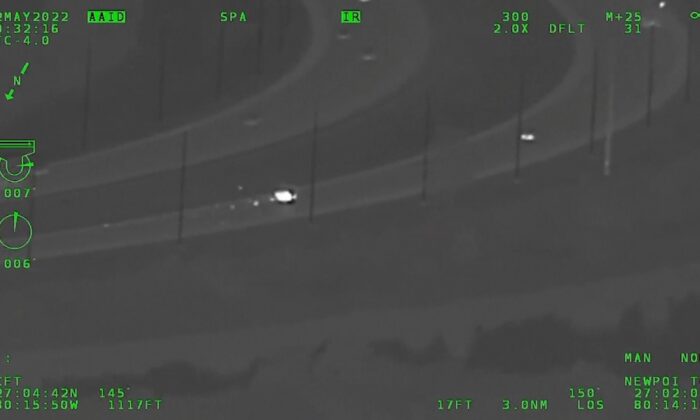 A 20-year-old man drove a stolen Mercedes SUV as fast as 178 mph (286 kph) during a chase night through six counties along Florida's Turnpike and Interstate 95, on May 4, 2022. (Martin County Sheriff’s Office via AP/Screenshot via The Epoch Times)
Crime and Incidents

Authorities say a 20-year-old man drove a stolen Mercedes SUV as fast as 178 mph (286 kph) during a chase Monday night through six counties along Florida’s Turnpike and Interstate 95.

Deputies deployed stop sticks to flatten the vehicle’s tires and a K-9 named Zorro then helped secure the fleeing suspect, the Martin County Sheriff’s Office said in a Facebook post. The chase began near Orlando and ended some 150 miles (241 kilometers) later near Hobe Sound.

Deputies in Martin County, which is north of West Palm Beach, were alerted to the chase through an alert from the Florida Highway Patrol.

Video footage from a sheriff’s office aircraft showed the car speeding along without headlights after deputies attempted to stop it.

The sheriff’s office said the ground pursuit was terminated because of the dangerous speeds, but the aircraft continued to track the stolen SUV. Deputies were able to deploy the stop sticks to deflate the vehicle’s tires.

The driver ran from the vehicle and into a wooded area.

The South Florida suspect faces multiple charges including grand theft of a motor vehicle, fleeing with a disregard for safety, and obstruction. His 28-year-old passenger was also arrested.