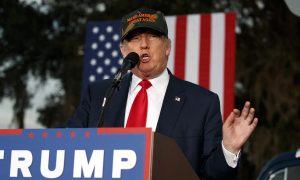 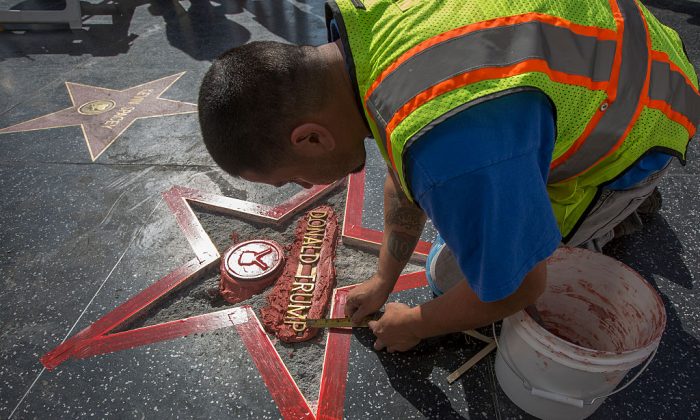 Workers repair the Hollywood Walk of Fame star of Republican presidential candidate Donald Trump after it was vandalized by a protester in Hollywood, California, on Oct. 26, 2016. (David McNew/Getty Images)
Southern California

A man was arrested on Dec. 23 by the Los Angeles police department after allegedly painting swastikas on President Donald Trump’s Hollywood star.

The suspect, 29-year-old Jose Ortega, has reportedly vandalized the star twice in four days, according to TMZ. The first attack occurred on Wednesday morning, Dec. 19, and the whole process was captured on a camera set up across the street by TMZ.

The video shows Ortega dressing in Black and walking straight to President Trump’s star on the Hollywood Walk of Fame. Then he bends down and scribbles on the ground. After finishing, he quickly takes off without raising much awareness.

Four days later, Ortega was seen doing the same thing. However, this time, he wasn’t able to flee as successfully as the first time after a witness called the police. He was taken into custody shortly afterward on suspicion of felony vandalism.

The president’s star was established in 2007 for his contribution to the show “The Apprentice” as host and executive producer. However, since he won the 2016 election, vandalism to his star has occurred a number of times.

In October 2016, a man dressed as a city construction worker attempted to remove the star with a sledgehammer and a pickax. As a result, the surface of the star was damaged with both the name and television icon removed. The suspect, James Otis, was arrested the next day.

Otis pleaded no contest to felony vandalism in February 2017 and was sentenced to three years probation, 20 days of community service and agreed to pay $4,400 for the damage, according to the City News Service.

Statement by President/CEO- @HollywoodArea Chamber: When people are unhappy with one of our honorees, we would hope that they would project their anger in more positive ways than to vandalize a California State Landmark.’ @realDonaldTrump Star destroyed in Hollywood. pic.twitter.com/2J1nlZ7Bxl

In July 2018, another vandal left the star almost totally destroyed. A 24-year-old man, who was later identified as Austin Mikel Clay from Glendale, California, smashed the star to pieces with a pickax.

Lt. Karen Leong, of the LAPD, told Los Angeles Times that after the vandalism had occurred, Clay had “called the police and advised he had vandalized Donald Trump’s star and basically called on himself and said, ‘See you soon.’”

Clay later pleaded no contest to felony vandalism and was recently sentenced to 20 days community labor and three years of probation. He was also sentenced to attend psychological counseling and pay more than $9,400 to the Hollywood Chamber of Commerce, according to City News Service.

The removal of the star was also once proposed by the West Hollywood City Council in August. However, the Hollywood Chamber of Commerce, which is in charge of the Hollywood Walk of Fame, decided to preserve the iconic star.

“The Hollywood Walk of Fame is an institution celebrating the positive contributions of the inductees,” said Leron Gubler, President/CEO of the Hollywood Chamber of Commerce in a statement. “When people are unhappy with one of our honorees, we would hope that they would project their anger in more positive ways than to vandalize a California State landmark. Our democracy is based on respect for the law.  People can make a difference by voting and not destroying public property.”