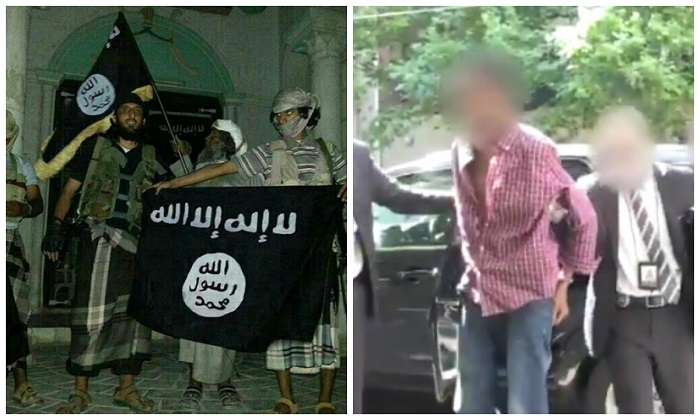 A file image of Somali al-Shebab fighters aligned with al-Qaeda (Mohamed Abdiwahab/AFP/Getty Images) and screenshot of police with a 20-year old man who is allegedly inspired by Al-Qaeda to commit a terror act in Melbourne’s Federation Square (Screenshot via Ten News).
Australia

A 20-year-old Australian man of Somalian parents has been arrested for allegedly planning to “kill as many people as possible” in the city of Melbourne on New Year’s Eve.

“What we will be alleging is that he was intending to use a firearm to shoot and kill as many people as he could in the Federation Square area on New Year’s Eve,” Patton said in a press briefing.

Tens of thousands of people gather for New Year’s Eve celebrations in Federation Square every year.

Charges are expected to be made after interviews are completed.

A 20 year old man has been arrested for allegedly planning a terror attack in Melbourne on NYE #TenNews pic.twitter.com/UfHpukajEH

“The male is one of our high risks persons of interest, we have been monitoring him for a lengthy period of time,” Patton said.

Patton said that the suspect did not access any firearms but had gained access to literature produced by the Islamic terrorist group al-Qaeda which acts as a guide book on how to commit acts of terror.

“He is associated with other persons in the Victorian extremists community… it is a very small community of extremists,” said Patton

“This is a person who would become particularly energised when overseas events occurred. He expressed a great amount of interest in committing an attack himself.

“The arrest means this threat has been removed, we are quite confident there is no risk or no threat to the Victorian community now we have removed him from society and he is being interviewed.”

Patton added that there is no ongoing threat posed in respect to New Year’s Eve or Christmas.

The suspect lived with his family in their home which is still being searched by police. Two other locations were searched on Monday – his place of work and relative’s home.

The man was believed to be planning the New Year’s Eve attack on his own and police are investigating how he became radicalized.

If you enjoyed this article, please consider sharing it on Facebook to show your support for The Epoch Times.