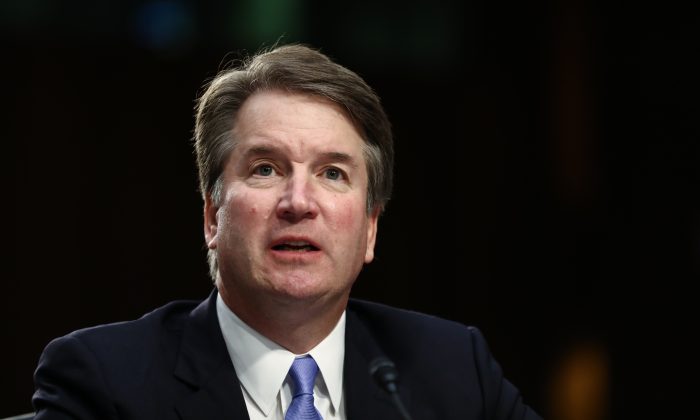 Judge Brett M. Kavanaugh testifies before the Senate Judiciary Committee during the third day of his confirmation hearing to serve as Associate Justice on the U.S. Supreme Court at the Capitol on Sept. 6, 2018. (Samira Bouaou/The Epoch Times)
Crime and Incidents

Nicholas John Roske, 26, appeared in court hours after being arrested with a Glock 17 pistol and a tactical knife in Chevy Chase, Maryland, near where Kavanaugh and his family reside, according to court documents obtained by The Epoch Times.

Roske was arraigned inside the federal courthouse in Greenbelt on a charge of attempted murder or threatening to murder a justice, which could land him 20 years in prison.

Roske walked in unrestrained and unmasked, wearing a long-sleeve dark shirt and black pants. He was accompanied by four U.S. Marshals. One fetched him a blue surgical mask, which he accepted and donned without protest. Masks are still required in the courthouse.

Asked if he understood the charge against him, Roske said: “I think I have a reasonable understanding, but I wouldn’t say I’m thinking clearly.”

He said he was on medications prescribed by a doctor, without naming them.

During the hearing, Roske repeatedly conferred with his lawyer, a public defender, after being asked questions by U.S. Magistrate Judge Timothy Sullivan. The hearing ended with Roske remaining in custody, although his lawyer indicated there may be an attempt for pretrial release at a later date.

According to charging documents, Roske told law enforcement officers following his arrest that he was upset about the recent leak of a Supreme Court draft decision indicating that the nation’s top court is poised to overturn Roe v. Wade, as well as the May 24 shooting at an elementary school in Uvalde, Texas.

“ROSKE indicated that he believed the Justice that he intended to kill would side with Second Amendment decisions that would loosen gun control laws,” reads an affidavit filed in court by an FBI agent. “ROSKE stated that he began thinking about how to give his life a purpose and decided that he would kill the Supreme Court Justice after finding the Justice’s Montgomery County address on the Internet.”

Ruth Sent Us, an activist group, published the addresses of Kavanaugh and some other justices online after the draft opinion was leaked in early May.

Roske purchased the pistol and other items, including a tactical chest rig, with the intention of breaking into Kavanaugh’s residence and killing the justice as well as himself, authorities said. Roske was also found to have zip ties, pepper spray, a hammer, a screwdriver, a crow bar, and duct tape with him.

At approximately 1:05 a.m. on June 8, two U.S. deputy marshals spotted a person dressed in black clothing, carrying a backpack and a suitcase, exiting a taxi that had stopped in front of Kavanaugh’s home. Deputies and other authorities are providing around-the-clock security at the homes of all nine justices following the leak of the draft opinion.

Apparently deterred by the visible law enforcement presence, the individual, later identified as Roske, walked away from the home.

A short time later, he called 911 and said he was having suicidal thoughts. He also revealed that he had a gun in his suitcase and that he had traveled from California to kill a Supreme Court justice, according to charging documents.

Montgomery County police officers were called and rushed to the scene, where they encountered Roske. He was still on the phone.

He was arrested without incident.

Officers took Roske to the nearby police station in Bethesda, Maryland, a spokesperson for the police told The Epoch Times. The FBI took over the case.

A spokesperson for the Supreme Court said a man was arrested near Kavanaugh’s home and that “the man was armed and made threats against Justice Kavanaugh.”

Roske was charged with a violation of federal law that prohibits assaulting, kidnapping, murdering, or attempting to kidnap, murder, or assault judges or immediate family members of judges.