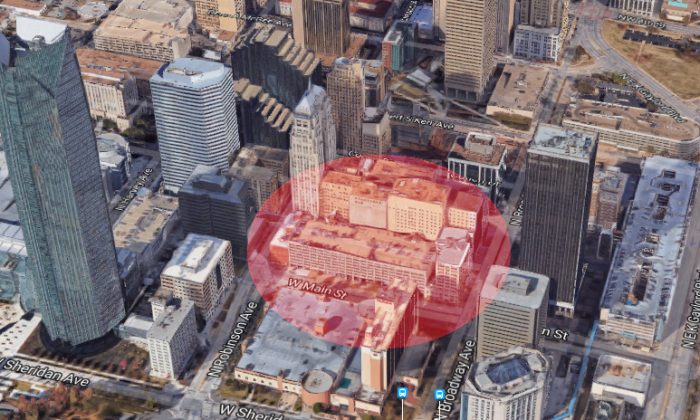 Man Arrested in Plot to Blow Up Bank With 1,000-Pound Car Bomb

Federal agents arrested an Oklahoma man early on Saturday morning after he attempted to detonate a van that he believed contained 1,000 pounds of explosives next to a bank in Oklahoma City.

Jerry Drake Varnell parked a van in an alley next to BancFirst, drove to a safe distance with an undercover federal agent, and dialed a phone number that he believed would set off the explosives, according to a criminal complaint filed on Sunday in U.S. District Court in Oklahoma’s western district.

Federal agents who have been monitoring Varnell, 23, for months arrested him at 1 a.m. He was charged with “malicious attempt to destroy a building by an explosive.” If convicted, he would face a maximum of 20 years in prison, with a mandatory five year sentence, according to a press release from the Department of Justice.

Varnell appeared on the radar of federal anti-terrorism authorities after an acquaintance reported his intention to blow up the Federal Reserve Building in Washington D.C. with a bomb similar to the one used in the 1995 Oklahoma City Bombing.

Varnell’s acquaintance was serving a sentence for violating parole at the time and cooperated with the Federal Bureau of Investigation agents without a promise for reward.

The FBI then directed Varnell’s acquaintance to carry on communications with him. Varnell advanced his plot to bomb the building, eventually meeting face-to-face with the acquaintance to discuss the plans further.

Varnell was eventually introduced to an undercover FBI agent who he believed was nicknamed “the professor.” They discussed plans for building a bomb and carrying out Varnell’s plot.

On the evening of Aug. 11, Varnell and “the professor” scouted the BancFirst building and then returned to his home to assemble what he believed was the explosive. Varnell then drove to the BancFirst building in downtown Oklahoma City, parked the van in an alley, checked if the detonation wires were secure and that the cellphone meant for detonating the device was powered on.

He then drove off with “the professor” and dialed the phone number he thought would detonate the bomb several times. FBI agents had the cellphone that Varnell was dialing and arrested him shortly after.

Throughout the investigation Varnell was monitored closely and the public was not in danger, according Kathryn Peterson, the special agent in charge of the FBI in Oklahoma. The explosives in the van Varnell drove were inert.

“I can assure the public, without hesitation, that we had Varnell’s actions monitored every step of the way,” Peterson said.

“I commend the devoted work of the FBI and our state law enforcement partners in ensuring that violent plots of this kind never succeed,” said Mark Yancey, United States Attorney for the Western District of Oklahoma.

Varnell lived in a house with his parents in Sayre, Oklahoma. He had built what he called “a bunker” on the property and planned to form a small militia.

“I’m out for blood. When militias start getting formed I’m going after government officials when I have a team,” he wrote in a text message to the FBI witness.