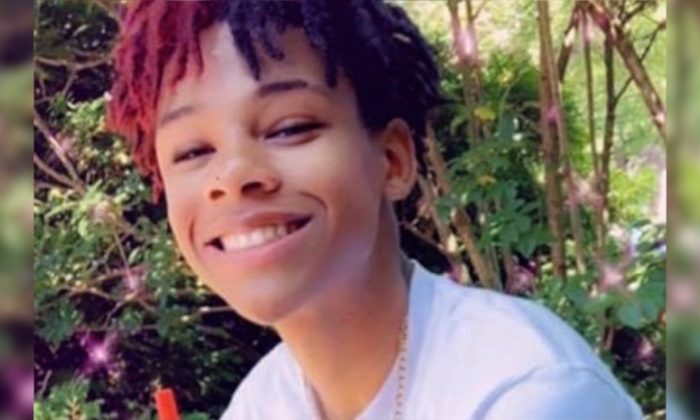 An 18-year-old man has been charged in the killing of Khaseen Morris, 16, who was fatally stabbed as eyewitnesses and friends videotaped the attack outside a Long Island strip mall this week.

Tyler Flach of Lido Beach was arrested and charged with murder on Wednesday in connection to the teen’s death and is set to be arraigned in Hempstead on Sept. 19, Nassau County police said in a statement.

Nassau County Police Det. Lt. Stephen Fitzpatrick told reporters the fight, which erupted outside an Oceanside strip mall on Sept. 16, involved as many as 60 teenagers and appeared to have started as a result of Morris walking another boy’s girlfriend home on Sunday night.

Morris, a 16-year-old student at Oceanside High School, was targeted by up to seven teenagers and fatally stabbed in the chest, while his 17-year-old friend suffered swelling to his head and a broken arm, police said.

Police said the fight was prearranged after Morris was seen with the girl. The teen received threatening messages prior to the incident to meet up after school and was attacked by teens from another school district, reported CBS2.

Morris was rushed to hospital where he was pronounced dead the next day.

Speaking to CBS2, the teen’s sister, Keyanna Morris, described her brother as “amazing.”

“Everyone loved him and he loved everyone,” she said of her brother.

“The girl wanted him to walk her home and he was like okay,” she told the news outlet. “This girl played a game and tried to get her ex-boyfriend jealous and said somebody else walked me home.”

“He was a person that would help anyone, and no one helped him,” she told ABC 7, after learning nobody stood in to help her brother. “He was the light, the energy of his whole family.”

Authorities described their shock after many of the onlookers decided to record the brawl on their phones, rather than call for help.

“They videoed his death instead of helping him,” Fitzpatrick said. “This can’t go on. Your friends are dying while you stand there and video it. That’s egregious.”

“These kids, they have no humanity,” Jasmine Ortiz, a parent of a student at Oceanside High School, told CBS2.

The Morris family had recently moved to the area from Freeport and the teen was finally content at his school, his sister told ABC 7.

“He told my mom this is the first time in so long that he’s been so happy because he finally found a school where he could be himself with nobody judging him,” she said.

The boy’s family held a candlelit vigil for him on Wednesday, and have since set up a GoFundMe page to assist with funeral costs.

“Khaseen was the youngest of four children and loved to love,” the page reads. “His smile could light up a room while his personality would light up everyone’s hearts.”

Video footage of the fight is under review by the Nassau County police department and will be examined as part of their investigation to identify possible suspects, Fitzpatrick said.

“If you are not a part and parcel of murder of Khaseen Morris, now is the time to get in touch with us and let us know who did this and why,” he added.