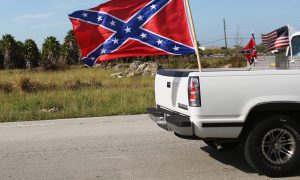 Dallas Police officials are investigating the death of a 4-year-old boy who was found on a street on Saturday, authorities said. A suspect has since been arrested in connection to the case.

“A child was murdered through a violent act. We believe an edged weapon was used,” Dallas police Executive Assistant Chief Albert Martinez said, according to CNN. “Even us as police officers, we are shocked. We’re very angry about what has happened to the small child.”

Martinez said someone called 911 at around 5:30 a.m. on Saturday to report the child, who was discovered in The Woods neighborhood of Dallas.

“We will pursue justice, whoever did this, and bring some sort of closure—not only to his family, but to our community,” Martinez said, adding that the FBI and other agencies are assisting in the investigation.

A suspect was arrested in connection to the case on Saturday night, officials said. The suspect’s name was not released to the public, said a news release.

“Through the hard work of the men and women of the Dallas Police Department, this criminal was brought to justice, and it would not have been possible without the Dallas FBI Evidence Response Team and the public’s assistance,” the news release read.

Investigators told CBS Dallas that they believed the boy lived in the neighborhood, while the woman who called 911 said that it was “very traumatizing.”

Other details about the incident, including the identity of the victim, were not revealed.