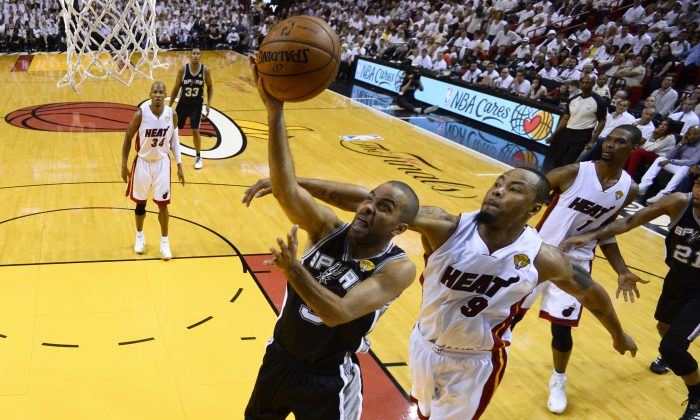 A story that says a man was “arrested for sabotaging air conditioning during” the first game of the NBA Finals between the San Antonio Spurs and Miami Heat is totally fake.

The article was posted on Empire Sports, a self-described “satire” sports news website.

“Brendan Kelly, a mechanical contractor working at the AT&T center, was arrested today after security footage showed him tampering with the air conditioning unit during game 1 of the NBA finals. Kelly, a die-hard Spurs fan, was quoted as saying he thought that sabotaging the air conditioning would make it extremely difficult for the Spurs’ opponents, the Miami Heat, to play, thus making him a fortune with his bookie,” it says.

According to a disclaimer, the article and every article on the site isn’t real.

“Empire Sports is a satirical and entertainment website,” the disclaimer page says. “Empire Sports uses invented names in all its stories, except in cases when public figures are being satirized. Any other use of real names is accidental and coincidental.”

MIAMI (AP) — An hour before Game 4 of the NBA Finals, LeBron James was talking about the World Cup.

A couple of Brazilian journalists nodded excitedly as he spoke, perhaps in part because soccer’s signature event is being hosted in their futbol-mad country. Chinese journalists were there as well, logging every word that James was saying because of his enormous following in their homeland. So were French, Italian, Filipino and German reporters, among others.

“The world,” Heat forward Shane Battier said, “is getting smaller every day.”

And that’s plenty evident at these NBA Finals, which are perhaps more global than ever before.

This Miami-San Antonio series is being aired live in 215 countries and territories, talked about in 47 languages, and has attracted social media attention from literally all corners of the globe through the NBA’s Facebook and Twitter portals alone. The Spurs have nine international players and the Heat have a huge international following because of stars like James and Dwyane Wade, along with the fact that coach Erik Spoelstra is Filipino-American.

Soccer is clearly a global game, which has been obvious forever.

Basketball can say the same, and that’s been clear for a long time.

“Now you’re on TV every night no matter where you play, the coverage through the playoffs and through the finals,” Spurs star Tim Duncan said. “You go anywhere in this world and you have fans everywhere. Fans of the NBA, fans of individual players, and obviously a lot of us travel in the offseason, and no matter where you go, you can’t get away from it. So you can feel how far spreading it is, and it’s great for the game. It’s great for the NBA.”

International growth been a key part of the NBA’s business model for years, so much so that former commissioner David Stern often and famously said that the league would have teams in Europe within a decade. There’s an international broadcasting compound at the finals now, and the series’ courtside logos and signage is being shown in eight languages — Chinese, French, Hindi, Japanese, Portugese, Spanish, and Turkish.

Wade, Battier and Tony Parker all have shoe deals with big Chinese companies, Wade with Li-Ning and Battier and Parker with Peak. It’s not uncommon to see those shoe companies have ad signage in Miami’s arena, and the Heat not long ago also had a prominent sponsor agreement with a Chinese beer company. The NBA has research showing that 300 million people play basketball in China — which equates to roughly the entire population of the United States.

Parker, a Belgian-born guard who plays for France and had a big international following even before signing with Peak last year, toured China — home of the world’s second-largest economy, behind only the United States — last summer.

“I love traveling and going to China was an unbelievable experience,” Parker said. “It was my third time. Brought my whole family. It was the first time for them. So we just had a great memories and great experience, and they really took care of me. It’s just great to see another side of the world and interact with your fans. Just had a great time.”

Battier went to China once, a few years ago, on vacation. He figured he’d never have any other reason to go there.

He’s been 10 times since. All have been for work.

Battier was skeptical when Peak approached him at first and questioned if the shoes would even be of NBA-quality, but said the deal has been extremely beneficial and satisfying for him. And while this is his final season, he’s long predicted that there will be an NBA team in China or another faraway place in the future.

“International growth and expansion is the obvious outlet for our game,” Battier said. “I think that domestically, we’ve tapped pretty much every pigeonhole and foxhole we can find. Because the game is so popular globally, it’s only a matter of time before we take our game in person to our fans around the world. The logistics argument is always the argument that detractors want to bring up, but it’s inevitable.”