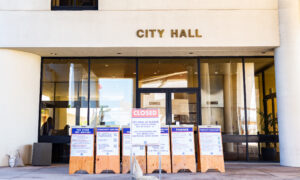 HUNTINGTON BEACH—A 25-year-old man was arrested in connection with the stabbing death of another man in Huntington Beach, police announced May 11.

Huntington Beach Police Department officers responded to the Huntington Beach City Pier about 6:35 p.m. May 5 on reports of a stabbing and found the 21-year-old victim wounded at the scene, according to Lt. Brian Smith.

The man was taken to the University of California–Irvine Medical Center, where he died of his injuries.

Officers canvassed the area for the suspect, identified as Joe Flores III of Anaheim, who fled the scene following the attack. He was found about 6:40 p.m. and taken into custody.

A preliminary investigation revealed Flores verbally accosted the man as he was walking on the pier, which led to an altercation, Smith said. During the altercation, Flores allegedly produced a knife and stabbed the man multiple times.

Investigators do not believe Flores and the victim knew each other, Smith said.

Flores was booked for murder with bail set at $1 million.

An investigation into the stabbing is ongoing and anyone with information was asked to call the Huntington Beach Police Department Tip Line at 714-375-5066. po