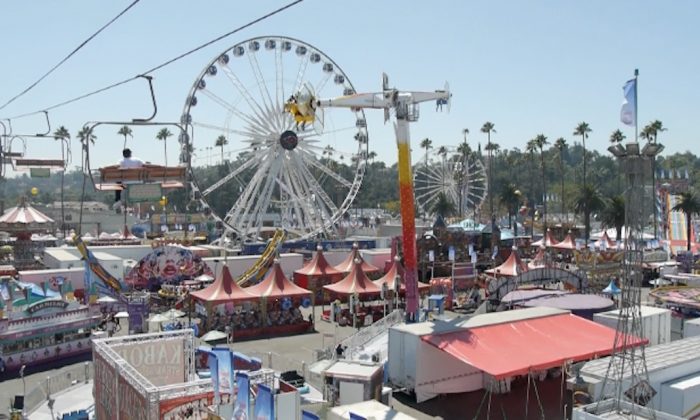 A California man was arrested for allegedly making a false mass shooting claim against the Los Angeles County Fair to avoid going to the Fair with this parents, the Pomona Police Department said Saturday, Sept. 14 during a press conference.

Police officials said that the Los Angeles County Fair staff notified them about an email they got about 3 p.m. on Friday that claimed there would be a mass shooting at the site on Sunday.

The Pomona Police Department said they and the FBI immediately launched an investigation into the email, tracking it to Erik Villasenor, a resident of Sylmar, California. Police arrested him at his home Friday night.

According to authorities, Villasenor’s alleged email read: “hello, I was told that someone was planning on doing a mass shooting on Sunday at the fairground. I just wanted to inform you guys already.”

‘Through interviews, they were able to determine that he did send that statement to the Fair, and ultimately determined it was a hoax,” Pomona Chief of Police Michael Olivieri Jr. said in a Facebook video on Saturday.

On Saturday, the Los Angeles County Fair tweeted, “We learned 9/13 of a possible threat. Working w/ Pomona Police; the FBI was able to confirm that the threat was false. It’s illegal to make threats; the individual was arrested. Fairplex would like to express its deep appreciation for the speedy response by Pomona Police; FBI.’

Villasenor, 22, was booked into Pomona jail for making a false threat, according to authorities.

When he was interviewed, Villasenor said “He felt that it was appropriate to send this threat, and we believe that it was with the intent that it would spark some chaos and commotion, and be captured on the media, and then he could use that as an excuse to his parents to not go to the Fair,” said Olivieri.

The police chief described the reasoning for sending the email threat as “kind of a crazy thing,” adding, “obviously in today’s world a message like that is very concerning,”

Chief Olivieri told reporters he had never seen a “more robust security system” than at the Fairplex in all his 30 years of service and working with the LA county fair.

Fairplex CEO Miguel Santana told the public at the Saturday press conference that the fair’s administration had recently invested $200,000 into a new command center to monitor, prevent, and communicate potential threats at the fair. The company was prompted to make the investment after the many recent mass shootings.

“It’s important that our community feels safe when they come to the Fair. It’s our number one priority,” Santana said.

He said that the fair monitors all social media activity during the fair to see if there is any suspicious activity and communicate that to law enforcement.

Pomona police have said that they are going to seek reimbursement for the time and resources that had been devoted to investigating Villasenor’s bogus threat.

Santana said of Friday’s events, “It really provided us an opportunity to test the security systems that we worked so hard to create.”