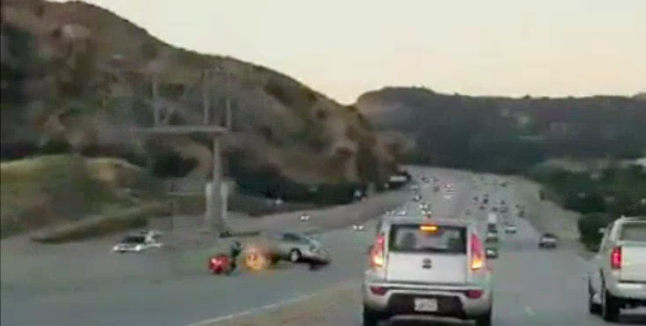 A road rage incident that turned into an accident near Santa Clarita California on June 21, 2017. (Screenshot via NBC4)
Crime and Incidents

A man who is suspected of being the hit-and-run driver in a now-viral road range incident in 2017 near California was arrested on Feb. 27.

“We are very, very proud to say that this person has been booked. We feel that we have the person responsible for this incident,” CHP Assistant Chief Mark Garrett said at a press conference.

Garrett said that the incident is a strong reminder to all of us of the “incredibly important” responsibility we shoulder when operating a motor vehicle on a highway, and that unfortunately it is these sensational events that remind us “to drive with caution and with regard for everyone’s public safety.”

“This is a strong reminder to all of us that operating a motor vehicle on a highway … to remember the level of danger that a 4,000 pound vehicle, or maybe even a 600 pound vehicle, can pose to innocent people and of course yourself.

“Remember when you’re out there that things may happen that may irritate you, that may frustrate you, but ultimately your job to yourself first and to the motoring public is to get home safe,” Garrett said.

A driver in another vehicle caught the road-rage-turned-car-accident on camera. That person said he started recording when the driver of a car inadvertently cut off a motorcyclist as they were passing.

In the video, the motorcyclist can be seen driving closely to a silver Nissan going south on State Route 14 near Newhall Avenue in northern Los Angeles County. The motorcyclist kicks the car, which then swerves towards the motorcyclist as if to push him toward the median. The car then appears to overcorrect, first turning to the right, then turning sharply to the left and hitting the median, which spins the car out of control.

The car ends up ramming into a Cadillac truck which gets flipped over. The Nissan comes to a stop, smoking in the middle of the highway.

The Cadillac driver had to be taken to the hospital for injuries. The driver of the motorcycle, thought to be Flanigan, fled the scene.

Flanigan was booked at the Santa Clarita Sheriff’s station and is facing three felony charges of assault with a deadly weapon, hit and run, and reckless driving.

Garrett said in at the press conference on Wednesday that he didn’t believe Flanigan had a criminal history.

Garrett said that they tracked down Flanigan “in a relatively short time” after the incident, but waited eight months to arrest him while they built the case because they didn’t consider him a flight risk or a threat to public safety.

“In order to build our case — to make sure that we had the proper amount of evidence, along with the district attorney’s office — we decided to monitor this individual, and again, build that case and use some techniques that I won’t get into here out concern for the integrity of the investigation,” Garrett said.