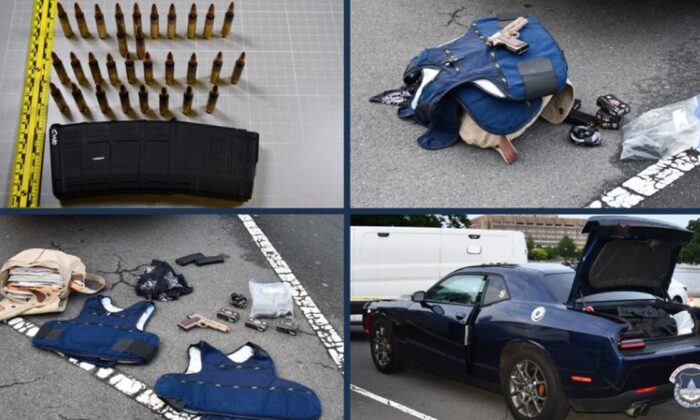 Pictures showing ammunition, body armor, a BB gun, and a Dodge Charger belonging to a man who was arrested outside the Capitol building on June 3, 2022. (US Capitol Police/Twitter)
US News

Man Arrested at the US Capitol With Fake Badge, BB Gun, and Body Armor: Police

The U.S. Capitol Police says that a man with a fake badge, body armor, and a BB gun was arrested outside the Capitol building on Friday morning.

In a news release, officials identified the individual as Jerome Felipe, 53, a resident of Flint, Michigan. He was also armed with “high capacity” magazines and other ammunition, said the U.S. Capitol Police.

Felipe was also identified as a retired police officer who had worked in New York.

“Just before 5:00 am,” the release added, “a U.S. Capitol Police patrol officer started talking to a man who had parked his 2017 Dodge Charger near Peace Circle, on the West side of the Capitol.”

Later, he presented officials with a fake badge with the writing, “Department of the INTERPOL,” printed on its front. The individual also made what was described as a false statement that he was a criminal investigator for INTERPOL, also known as the International Criminal Police Organization headed in Lyon, France.

“Felipe gave officers permission to search his vehicle,” the release said. “The officers discovered a BB gun, two ballistic vests, several high capacity magazines, and other ammunition in the car.”

They added that no real guns were found inside his vehicle.

Officials said they are still attempting to determine why Felipe was parked near the Capitol building.

A spokesperson for the New York City Police Department told the New York Post that Felipe was an NYPD officer and retired in 2018. The paper reported that records suggested that he had lived in the Bronx as recently as 2019.

“We are fully cooperating with the U.S. Capitol Police investigation,” the spokesperson said.

During a January congressional hearing, U.S. Capitol Police Chief Tom Manger called for lawmakers to create a new agency to investigate threats on the Capitol and lawmakers. He claimed that there were more than 9,000 threats lodged against House representatives and senators in 2021.

Months after the Jan. 6 Capitol breach, a U.S. Capitol Police officer was killed and another was injured in April 2021 after a man rammed his vehicle into a security barrier near the Capitol. The suspect in that case was identified as Noah Green, a follower of the Nation of Islam. After ramming his vehicle into the barrier, Green exited with a knife and was shot and killed by a Capitol Police officer.