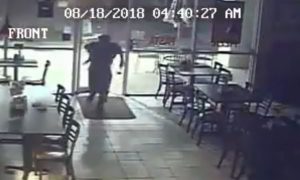 A man was arrested by Sacramento County Sheriff’s Department on Dec. 26 for allegedly stealing thousands of books and DVDs from at least one local library.

The suspect, 46-year-old Shahin Sadighian of Fair Oaks, California, is facing charges of felony shoplifting and grand theft after 2,689 books and 3,846 DVDs were discovered in his home. Investigators estimated that the stolen items are worth more than $100,000.

“It had some very odd characteristics. The books were… they weren’t mutilated for the most part, and all of them still had their identifying markings on them,” said Sgt. Shaun Hampton of Sacramento County Sheriff’s Department.

A picture provided by authorities shows books and DVDs piled up in a room of Sadighian’s home at Fair Oaks. In addition, the recovered books and DVDs were still attached with labels that indicated they were from the Sacramento Public Library.

Sacramento Library Director Rivkah Sass told Fox that the books and DVDs are from Fair Oaks Library, where the staff has noticed some of their items started disappearing over the past year. KCRA also reported the library had a “higher than normal number of items missing” when staff did a routine inventory analysis.

“They began actually looking at patterns of usage and discovered that a lot of items were missing on a certain day of the week,” Sass said.

On Dec. 18, the library reported to sheriff’s deputies that their surveillance camera captured a man putting several books in a backpack while only checking out one book.

The man was later identified as Shahin Sadighian. And deputies served a search warrant the day after Chrismas at Sadighan’s Fair Oaks home.

“There were items piled floor to ceiling in many rooms,” Sass said. She also told Fox that nearly half of the recovered items were taken within the last year.

Sadighian was later released on bail but still faces charges of grand theft and felony shoplifting.

“It’s a real cost because those items cost money that we use to purchase items that people share,” Sass said. “You know, it’s not like the old Seinfeld show where the old library police come, this is a big deal.”