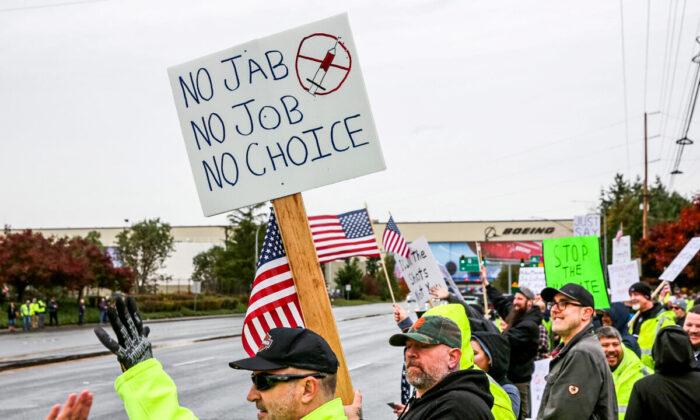 Boeing employees and others line the street with signs and American flags as they protest the company's COVID-19 vaccine mandate, outside the Boeing facility in Everett, Washington, on Oct. 15, 2021. (Lindsey Wasson/Reuters)
Southern California

A man was arrested after he allegedly drove his vehicle into a group of people protesting against vaccine mandates in Southern California, officials said over the weekend.

A spokesperson for the Los Angeles County Sheriff’s office said that 64-year-old William Aslaksen was arrested about 90 minutes after the incident on Saturday. He was charged with felony assault and is being held in the Sheriff’s Department’s Palmdale station.

“A witness stated a man disagreed with the protest, entered his vehicle and intentionally drove toward the protesters,” Deputy Trina Schrader said in a statement Sunday, according to local media reports. “The suspect then drove away westbound and out of view.”

One woman in her 40s, who was not identified, was injured during the incident, officials added. Her injuries were described as non-life-threatening, although she was taken to the hospital, Schrader said.

The protesters were demonstrating against COVID-19 vaccine mandates in Palmdale. Lt. T. Kim of the Palmdale Sheriff’s Station told Channel 4 that the demonstration against mandates started at around 10 a.m. Saturday at the intersection of 10th St. West and Rancho Vista Boulevard.

Kim said that Aslaksen was discovered and found at his home in Antelope Valley. He is slated to appear at the Antelope Valley Municipal Court in Lancaster on Tuesday.

Other details about the incident were not provided by sheriff’s officials.

In recent weeks, demonstrations against vaccine mandates have erupted across the United States, including in New York City and Los Angeles, where protesters have characterized the requirements as draconian. Opponents of mandates have said that such policies would create two distinct classes of people: vaccinated and unvaccinated.

A demonstration occurred in Brooklyn in front of the Barclays Center over the past weekend, with demonstrators demanding that Brooklyn Nets superstar Kyrie Irving play for the team after it was announced he would be suspended until receives the COVID-19 vaccine. The city requires that customers and employees present proof of COVID-19 vaccination before entering a range of different establishments, including restaurants, bars, and other vencues, including the Barclays Center.

Irving is “doing something that [former San Francisco 49ers quarterback Colin] Kaepernick did … he’s basically doing the same thing, he’s like taking a knee and I’m happy that he did that—you understand?” one protester told an ABC affiliate.