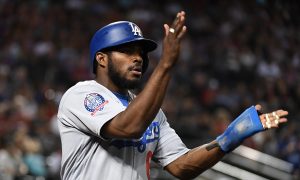 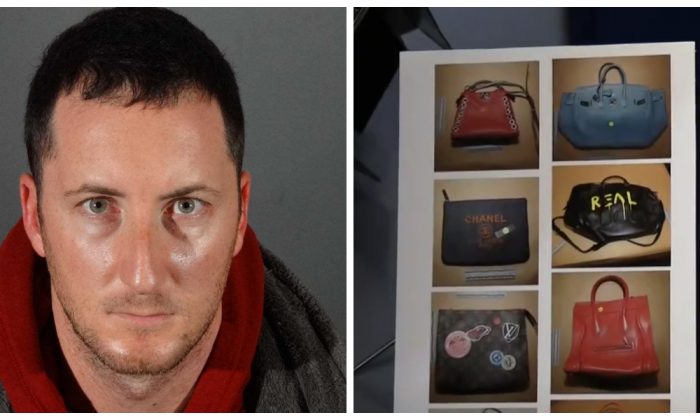 Benjamin Eitan Ackerman was arrested in connection with a series of celebrity and high-end home burglaries, announced the LAPD at a press conference on Jan. 2, 2018. (LAPD/Screenshot)
Southern California

A man was taken into custody after police discovered in his possession more than 2,000 items that were linked to celebrity home burglaries, according to the Los Angeles Police Department.

Items like jewelry, artwork, fine wine, clothing, handbags, and sports memorabilia, having an estimated value of millions of dollars, were verified by police as property stolen from a number of celebrities, including Usher, Jason Derulo, and Adam Lambert.

Police said the suspect, 32-year-old Benjamin Eitan Ackerman, would disguise himself as a realtor or home buyer to approach victims or their properties several weeks before the burglary.

“Ackerman targeted high-end celebrity homes that were for sale, or were being shown during open house appointments,” LAPD Capt. Cory Palka said at a press conference on Jan. 2.

Ackerman also used a variation of his name to attend the open house in some cases or claimed to be an employee of an investment firm, the police said in a statement.

“When he showed up, he was dressed to the nines. He acted the part. He was slick.” LAPD Detective Jared Timmons said at the news conference. “He toured open houses and would come back later.”

A number of homes were burglarized weeks after being shown to Ackerman. Jewelry and $300,000 cash were stolen during a break-in at musician Janson Derulo’s Tarzana home in September 2017, according to CBS.

Police said it was the burglary of a multi-million-dollar home that was listed for sale on July 22 that ultimately led authorities to Ackerman.

Detective Timmons said during the press conference that the victim had called police after the home was burglarized. The victim indicated that Ackerman had claimed to be a realtor at their open house, and he was one of the people who had inquired about a rare piece of artwork that was later stolen.

“From that point, he became a person of interest,” said Timmons.

On September 20 detectives served a search warrant at Ackerman’s residence and storage unit, which resulted in the arrest of Ackerman and the recovery of a large number of valuable items.

Investigators also believe Ackerman has worked with other people and called their strategy “sophisticated.”

According to the statement from LAPD, Ackerman mainly targeted high-value homes and celebrity homes; however, one of the victims turned out to be a family friend.

Police said stolen items have thus far been confirmed and identified by 13 different victims, but there could be more victims. Some of the stolen items have been displayed on a website, and police seek the assistance of the community to identify any additional victims.

Detectives said Ackerman has been engaged in criminal activity for the past several years and has connections in New York. Los Angeles County inmate records show Ackerman was released on Sept. 24 on $1 million bail, four days after he was booked into jail.

Police said this is an ongoing investigation and they are still trying to determine how the suspect conducted his operation. Authorities urge home sellers to verify people’s identities at every open house event.

“It doesn’t appear anybody checked this person [Ackerman] out,” said Detective Timmons. “We encourage all the realtors, everyone out there who are selling your homes, challenge every single person that comes in there, ask for verification, follow up with their place of business, verify that they are actually employed there. Because in these cases, it does not seem that any of that was done until after the fact.”