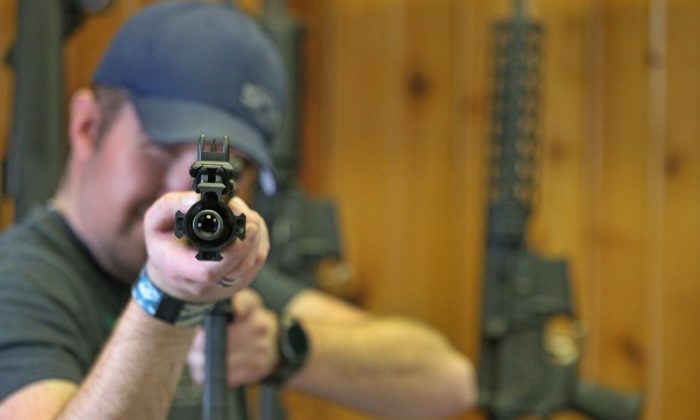 Man Armed With AR-15 Stops Attack by Neighbor in Illinois

A man armed with an AR-15 rifle stopped an attack by one of his neighbors in Illinois on Monday, and was able to hold the neighbor until police officers arrived on the scene to take control.

The situation unfolded at an apartment building on Harbor Drive in Oswego Township, reported WGN.

An argument at the apartment turned ugly when one of the people involved in the argument whipped out a knife and attacked the other.

That’s when Dave Thomas, who was watching it unfold, ran into his house and grabbed his rifle.

“I poked my head out the door. There was a pool of blood, blood was everywhere in the hall,” Thomas said. “There was still a confrontation going on, there were about three or four people involved at this point.”

Thomas said he ran back to his house and grabbed his AR-15.

“I grabbed the AR-15 over my handgun—bigger gun, I think a little more of an intimidation factor. Definitely played a part in him actually stopping.”

Thomas said that what he did is “a perfect example of a good guy with an AR-15 stopping a bad guy with a knife.”

The Kendall County Sheriff’s Office credited Thomas with stopping a stabbing with “only the threat of force” from the rifle, a release said, reported the Chicago Tribune.

The attacker, who has not been identified, was able to get away briefly before being apprehended by police and taken into custody, according to WGNTV. He has multiple charges pending.

The stabbing victim was rushed to a hospital with multiple injuries. The victim’s condition is not yet known.

Thomas had a valid Firearm Owners Identification Card and a concealed-carry permit, the sheriff’s office said.

The incident comes amidst a nationwide debate over AR-15s, with some people saying they should be banned following the recent mass shooting in Parkland, Florida.

House Democrats introduced a bill that would prohibit the sale of semi-automatic weapons, including the AR-15 and AK-47, although the legislation isn’t expected to pass through the Republican-controlled legislature.